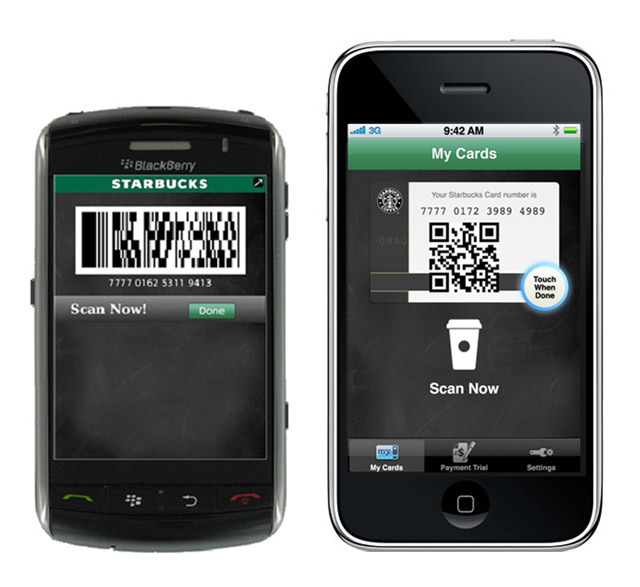 The next time you order a trenta-sized iced mocha frapp, you won’t need to whip out your wallet. You’ll just need to flash your iPhone at the barista.

Starbucks has rolled out its mobile payment system nationwide, hitting up nearly 7,000 company-operated coffee shops around the United States. The idea is that you can load up your Starbucks account with some funds (just like how you would with the physical Starbucks Card), boot up the iPhone app, show the barcode to the scanner, and enjoy your cuppa joe.

Yes, I said barcode. The mobile payment system being implemented by Starbucks uses a special 2D barcode rather than the near-field communications (NFC) technology being shoved into products like the Google Nexus S smartphone. They say that NFC just isn’t popular enough yet. “Once there are more users,” says Starbucks Card category manager of innovation Chuck Davidson, “we will adapt.”

In addition to the Starbucks Card app being offered on iOS for iPhone and iPod touch, there is also an app being launched for BlackBerry as well as one currently in development for Android.

I’m not convinced that this is necessarily any faster than whipping out an actual Starbucks Card, since you have to load up the app and show the barcode for it to work, but it is good to see that they’re innovating by doing more than making bigger cups and unveiling new logos.

SEATTLE, January 19, 2011 – Starbucks (NASDAQ: SBUX) today announced the launch of mobile payment in all U.S. company-operated stores, allowing customers to pay for in-store purchases with select smartphones. Building on the earlier introduction of Starbucks Card Mobile App for select BlackBerry® smartphones, iPhone® and iPod® touch and a successful mobile payment test program, customers now have access to the largest mobile payment program in the U.S. and the fastest way to pay at Starbucks. This national program now includes nearly 6,800 company-operated stores and more than 1,000 Starbucks in U.S. Target locations.

To experience mobile payment at Starbucks, customers just need to download the free Starbucks Card Mobile App for select BlackBerry smartphones, iPhone or iPod touch mobile devices. More than one-third of U.S. Starbucks customers use smartphones, of which nearly three quarters use BlackBerry smartphone or iPhone mobile devices. In addition to the mobile payment capability, the app allows customers to manage their Starbucks Card account, check their card balance, reload their card with any major credit card (iPhone users can also use the PayPal feature), check their My Starbucks Rewards status and find a nearby Starbucks store with the store locator feature.

Customers can pay with their smartphone by holding their mobile device in front of a scanner on the countertop and scan the Starbucks Card Mobile App’s on-screen barcode to make a purchase. Customers have successfully adopted this technology in test markets in Seattle, Northern California, New York and more than 1,000 Starbucks in U.S. Target stores.

Mobile payment is built on the Starbucks Card platform, which continues to experience significant customer adoption. Customers loaded more than $1.5 billion on Starbucks Cards in 2010, an increase of 21 percent over 2009, driven in part by the My Starbucks Rewards program which provides benefits to customers who pay with a registered Starbucks Card at participating stores. With the introduction of the quick and easy Starbucks Card Mobile App and the mobile payment feature, customer will find yet another reason to use their Starbucks Card for payment.

iPhone and iPod touch users can download the app from the App Store at www.itunes.com/appstore/.

Since 1971, Starbucks Coffee Company has been committed to ethically sourcing and roasting the highest-quality arabica coffee in the world. Today, with stores around the globe, the company is the premier roaster and retailer of specialty coffee in the world. Through our unwavering commitment to excellence and our guiding principles, we bring the unique Starbucks Experience to life for every customer through every cup. To share in the experience, please visit us in our stores or online at www.starbucks.com.

The BlackBerry and RIM families of related marks are the exclusive properties and trademarks of Research In Motion Limited.

Apple, iPhone and iPod touch are trademarks of Apple Inc., registered in the U.S. and other countries.