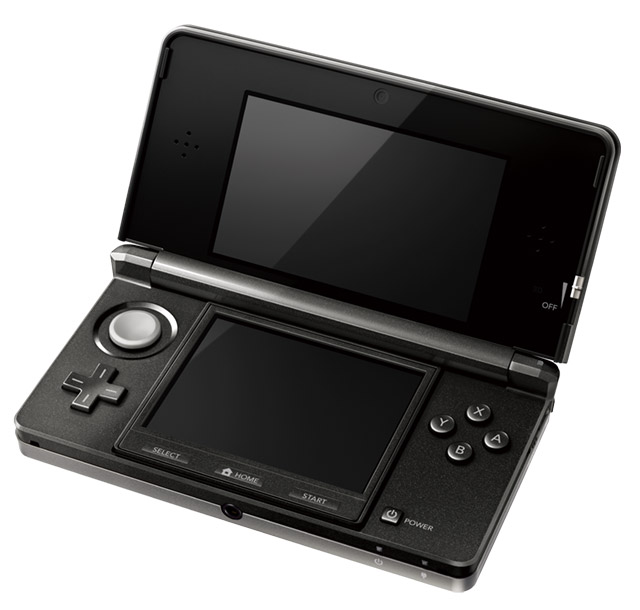 We saw the glasses-free Nintendo 3DS for the first time at last year’s E3 Expo in Los Angeles and now Nintendo is finally ready to get the next-generation portable gaming console into the hands of consumers. Shiggy, Reggie, and the rest of the Ninty crew blasted out a press release today and it outlines the details of the 3DS launch.

Perhaps the most important tidbit is the price. Nintendo has decided to sell the 3DS for $249.99 and it’ll hit store shelves on March 27. You’ll have your choice of Cosmo Black or Aqua Blue and it will come pre-loaded with a handful of mini-games. Like the Wii, you’ll have the opportunity to create a Mii: either by way of a picture taken by the 3DS or imported on an SD card from your Wii.

Oh, and the best part? No more of these stupid game-specific friend codes for online multiplayer. You’ll finally be able to add a single Friend Code for your friend to pair it up for some online Street Fighter, Mario Kart, or what have you. It’s no longer software dependent. (About freakin’ time, Nintendo!)

Nintendo is also debuting the Nintendo eShop, which is basically the same as the DSiWare, WiiWare and Virtual Console that we already know. You can download older Game Boy and Game Boy Color titles this way. The console will also track your gaming history (just like the Wii) and use the 3DS as a pedometer.

Many of us were concerned that Nintendo would approach the $300 price point for the 3DS, so I guess $250 doesn’t sound so bad. You can look forward to 3D versions of Star Fox, Animal Crossing, Resident Evil, Madden NFL, and more starting at the end of March.

NEW YORK–(BUSINESS WIRE)–The company that changed the world of video games with touch-screen gaming in 2004 and motion-controlled gaming in 2006 now pioneers the next dimensional shift. On March 27, Nintendo introduces portable entertainment in 3D – without the need for special glasses. The Nintendo 3DS™ system will be available in either Cosmo Black or Aqua Blue, and will have a suggested retail price of $249.99. Pricing outside the United States will be established by the local markets, but offer similar consumer value.

Nintendo 3DS includes two screens. The bottom touch screen makes use of a telescoping stylus that is stored in the unit itself. The top screen displays 3D visuals to the naked eye. Looking at the screen is like peering through a window into a world where characters and objects have true depth. The system also has a 3D Depth Slider that lets players select the level of 3D they enjoy the most. The 3D effect can be ratcheted up to the highest level, scaled back to a more moderate setting or even turned off completely, depending on the preference of the user.

In addition to the familiar + Control Pad and button controls found on previous Nintendo hand-helds, Nintendo 3DS now also includes a Circle Pad, which provides a full 360 degrees of direction, giving it the freedom and precision needed to play games in 3D worlds. It brings the same degree of responsiveness that gamers enjoyed when Nintendo introduced an analog control stick to navigate Mario™ through Super Mario 64™ on the Nintendo 64™ system.

A built-in motion sensor and gyro sensor can react to the motion and tilt of the system, so whether players are twisting their systems side to side or moving them up and down, their motion-compatible Nintendo 3DS games respond instantly. No other system includes so many tools for game developers to create new and fun experiences for players.

Two features will allow owners to stay connected in new ways. Both deliver bonus content to owners as they move around during their daily lives, so users might open up their systems at any moment to find new surprises. For owners who choose to activate it, the StreetPass™ feature is capable of exchanging game information with other Nintendo 3DS systems as owners pass one another. Small packets of information can be exchanged using this data-transfer method, such as Mii™ character data, maps for games or high scores and custom character data for different games. The SpotPass™ feature can connect to compatible public hotspots and through a wireless broadband Internet connection at home, even if the system is in Sleep Mode. Once connected, the Nintendo 3DS system will receive new content and updates on a regular basis.

Each Nintendo 3DS system comes pre-loaded with a variety of fun games, applications and features, such as Nintendo 3DS Camera. Nintendo 3DS has three cameras. One camera points at the user, while two additional cameras point outward. These two outer cameras take photos in 3D. The fun, built-in game Face Raiders™ asks users to shoot at funny depictions of their own faces. Nintendo 3DS, when put into Sleep Mode, can act as a pedometer, while letting users earn Play Coins for the steps they take that can then be traded in for additional content in compatible games and applications. By accessing the Activity Log, users can check their steps as well as their play time. With Nintendo 3DS Sound, users can enjoy sound-manipulation tools or rock out while listening to their MP3 or AAC music files. An upgraded Internet browser will also be available via a system update.

The Mii Maker™ application gives users new tools to create Mii™ characters even more easily: Users can either import Mii characters from their Wii systems using an SD memory card or use the camera to take a picture of a person and have an automatic Mii character created. Users can even save their Mii characters to an SD card as pictures, which enables them to be used any way a digital photo would for personal use, such as a profile picture on social-networking sites.

The Nintendo eShop, through a system update, will offer access to downloadable games, including Nintendo DSiWare™ and ones specifically made for Nintendo 3DS. Also, just as the Virtual Console service on Wii makes retro games available for download, the Virtual Console games on Nintendo 3DS will be pulled from classic Game Boy™ and Game Boy Color games. Players will be able to view game videos, download demos for select games and see how other consumers rated the games. The Nintendo eShop will use a cash-based system. Users can either input credit card information in the shop or purchase a Nintendo 3DS Prepaid Card at retail locations.

Nintendo 3DS comes with six augmented-reality cards, called AR cards. When the two outer cameras are pointed at the cards, they read the cards and superimpose images and animations onto the scene. So users shouldn’t be surprised if they see a dragon popping out of their kitchen tables. Developers can also use this technology to add creative new experiences to their games.

Built-in parental controls can be used to limit Internet access or some of the wireless functions. By using a PIN code, parents also can turn off the 3D function altogether, or limit the ratings of the games that their kids can play.

Fans of online play will be happy to learn that the friend codes for Nintendo 3DS are specific to each Nintendo 3DS system, not each game. Once friends trade hardware codes, at any time they can check their friends list to see which of their friends are online and what they are playing.

Nintendo 3DS can also play Nintendo DS game cards with their original 2D visuals. The system also includes a slot for an SD memory card. To help users get started, every system comes with a 2GB SD memory card (though owners can provide whatever size they like). Using a service that will be provided after the hardware’s launch, Nintendo DSi™ and Nintendo DSi XL™ owners will be able to transfer games downloaded from the Nintendo DSi Shop onto their new Nintendo 3DS systems.

During the launch window (between the March 27 launch date and the E3 Expo in early June) more than 30 games will be available to Nintendo 3DS owners. These include Nintendo-created games like Pilotwings Resort™, which has players soaring acrobatically over iconic Wuhu Island; nintendogs™ + cats, a new version of the Nintendo DS classic with a feline enhancement; and Steel Diver™, a side-scrolling submarine adventure that gives the illusion that the player is peering into an aquarium. Other Nintendo 3DS games in the works include The Legend of Zelda™: Ocarina of Time™ 3D, Star Fox 64™ 3D, Kid Icarus™: Uprising and new installments in the Mario Kart™, Animal Crossing™ and Paper Mario™ series.

About Nintendo: The worldwide pioneer in the creation of interactive entertainment, Nintendo Co., Ltd., of Kyoto, Japan, manufactures and markets hardware and software for its Wii™ home console and Nintendo DS™ family of portable systems. Since 1983, when it launched the Nintendo Entertainment System™, Nintendo has sold more than 3.5 billion video games and more than 577 million hardware units globally, including the current-generation Wii, Nintendo DS, Nintendo DSi™ and Nintendo DSi XL™, as well as the Game Boy™, Game Boy Advance, Super NES™, Nintendo 64™ and Nintendo GameCube™ systems. It has also created industry icons that have become well-known, household names such as Mario™, Donkey Kong™, Metroid™, Zelda™ and Pokémon™. A wholly owned subsidiary, Nintendo of America Inc., based in Redmond, Wash., serves as headquarters for Nintendo’s operations in the Western Hemisphere. For more information about Nintendo, please visit the company’s website at http://www.nintendo.com.