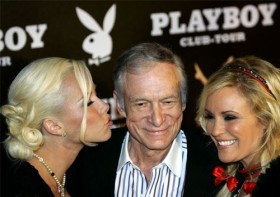 All those accusing Apple of selling out their no-nude standards the minute Jobs walked out the door, you can relax.

Playboy’s already been on the App Store for more than a year, but with a censored version of their magazine to conform to Apple’s strict no-smut policies. But when Hefner tweeted that the uncensored Playboy magazine is coming to the iPad in March, many people blew their lids.

Speculation ran rampant until one Playboy spokeswoman went on the record to clarify. The iPad will not be getting a new, uncensored app through the App Store, she says. Instead, they’ll be taking advantage of the new web-based subscription service accessible through the iPad as well as a web-based interface to dive through a loophole in Apple’s anti-porn policy.

“We are releasing a web-based subscription service with Bondi Digital Publishing that will give users access to every issue of Playboy both past and present,” the spokeswoman said. “The service will be iPad compatible and will utilize iPad functions… We also have plans to release a non-nude version of a Playboy-branded iPad app in the coming months that adheres to all of Apple’s policies and guidelines.”