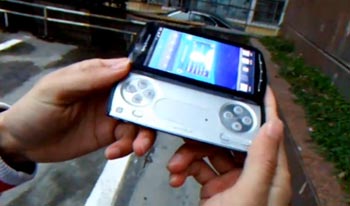 We’ve seen what appears to be official product shots and a video in a dimly lit room. Now, we’re getting a fairly thorough hands-on session with the upcoming Sony PlayStation Phone. This is in broad daylight in the middle of a parking lot.

Likely to be sold as the Sony Ericsson XPERIA Play, the so-called PSPhone being showcased in the demo video below looks to be in line with all the leaked shots and rumors that have filtered their way through the Internet. You get the gaming controls and a couple of touch-sensitive pads to replace the conventional thumbsticks of a Dualshock controller.

There are at least two things of note in this video. First, the XPERIA Play looks to be quite thick. It’s obviously not one of the thinnest phones on the market and it has the same characteristic “curve” in the back as, say, the Vivaz Pro. The beefier profile might actually be good for gaming, especially if there really are trigger buttons in place.

Second, you’ll notice at around the 0:50 mark of the video that the sliding mechanism seems to be a little on the stiffer side of things. From what I can see, it’s not spring-loaded and it’s possible that the two halves are being situated too close together. If you recall, this happened with the W580 years ago and it sometimes resulted in cracked keys. I hope that’s not the case here.

In any case, what do you think? Is this PSPhone going to dethrone iPhone as the gaming phone of choice?