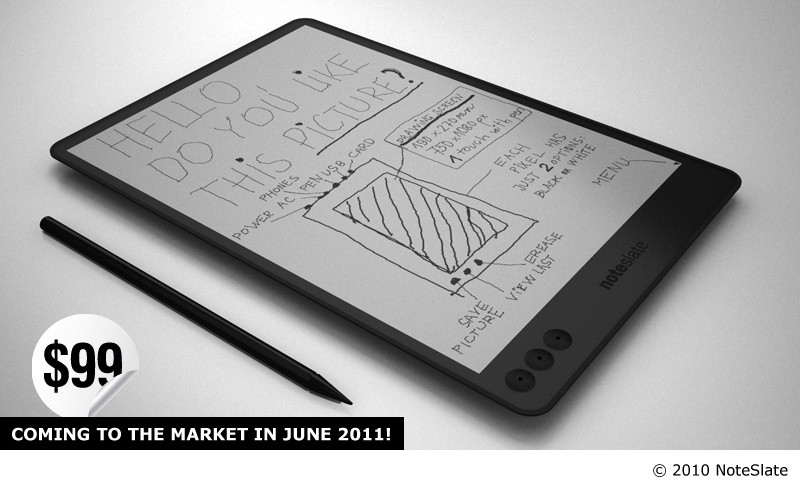 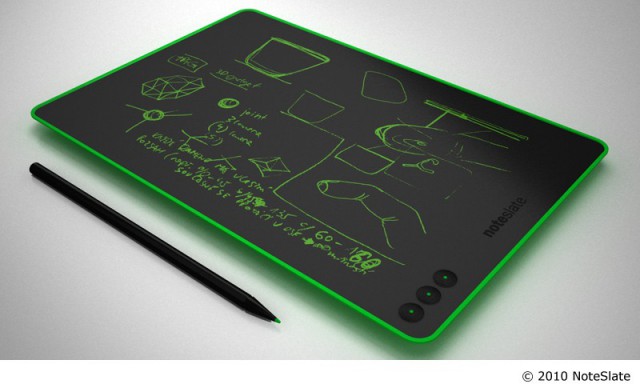 Among 2011’s impending hail of new tablet releases, there’s one slate that’s going to stand out among the rest in its single-function, single-colour glory: The NoteSlate.  An upgrade to the Boogie Board of yesteryear.

I fondly remember that day near the end of 2009 when me and my at-the-time girlfriend discovered our Sony Reader Touch’s drawing program. We wrote silly notes and drew silly pictures with the little stylus on the little screen; it brought us whole minutes of cheap laughs and good times.

Come June, the NoteSlate will take those good times to the next level – or a lower level. Possibly a different podium at the same level.

It basically looks like a tiny, sleek 13″ chalkboard or whiteboard, depending on which colour scheme you choose. Its touchable 750 x 1080 eInk display (whether that’s the same E Ink-brand display you’ll find in the Kindle is yet to be announced) runs almost right to the edges, giving some style to your either black-on-white or white-on-black doodles. That is, until the release of three single-colour-on-black versions are released down the road, as well as an all-three-colours-on-black version. It’s also got a full-sized stylus, offering the option of drawing or writing comfortably as opposed to solely using your fingers.  A USB charging port, SD slot where screen captures are saved to, and a slot for the stylus.  The three buttons across the bottom are Save Picture, View Last and Erase.

But that’s all it can do: Be the medium for and storage place of your notes and drawings. I mean, it plays MP3s, too. But what doesn’t these days?

That said, it’s not all bad. At $99 and with 180 hours of battery life, that’ll get you through more than a semester’s worth of college lectures on a single charge and within a student’s budget. And they do have big plans for the device.

Its initial release will be the bare-bones note taker, but it’ll be an open-sourced bare-bones note taker. Version 1.5 plans for PDF and text viewing capabilities, with version 2 incorporating OCR handwriting-to-text. Once this happens, it may really carve out a niche in the student demographic.