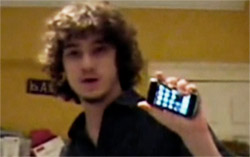 He may not exactly be a household name, but in the realm of hackers, George “GeoHot” Hotz is highly regarded as a pioneer. He was the first one, after all, to ever jailbreak an iPhone. After turning his attention to the PS3 recently, though, he’s managed to get the attention of Sony’s lawyers.

As you may have heard, Sony is filing a lawsuit against Hotz and the rest of the fail0verflow team for “jailbreaking” the PlayStation 3. The DMCA has been updated to allow for the jailbreaking of “closed OS” devices, but the wording is restricted to mobile phones like Android and iOS. That’s the loophole that Sony is trying to use in this case.

In the video interview posted below from G4’s Attack of the Show, Hotz says it’s all because he made Sony “mad.” You see, it’s not even really an issue of piracy; Hotz just wanted to unlock the “Other OS” feature that was taken away in a recent PS3 firmware update. He wants to run homebrew. “The way piracy was previously done [on PS3] doesn’t work in my jailbreak”, he says. “I made a specific effort while I was working on this to try to enable homebrew without enabling things I do not support, like piracy.”

Considering that Hotz was able to set quite a precedent with the iPhone jailbreak and the subsequent win over the Apple lawsuit, I don’t see why his lawyers can’t extend that precedent to non-mobile closed-OS devices like the PS3 too.