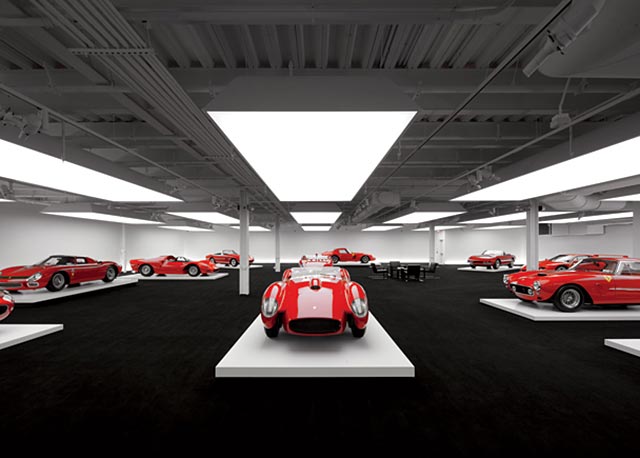 It’s got all the makings of a scene from a Batman movie: 60 of the rarest and most valuable cars in the world, owned by one indescribably wealthy collector and maintained in perfect running condition – all on display in a personal garage museum hidden behind a sliding wall panel.

Only, it’s not some lofty Hollywood creation. And in place of Bruce Wayne is fashion designer Ralph Lauren.

Vanity Fair’s photographer Todd Eberle was recently given a tour of the Westchester, New York D.A.D. Garage (a name derived from the first initials of Lauren’s children), giving a look into the famed designer’s auto-obsession.

When the wall panel slides away, visitors find themselves face-to-face with North America’s only Lamborghini Reventón, one of only 15 in existence sold at $2 million a piece. Deeper inside the garage are such cars as a 1938 Alfa Romeo Mille Miglia roadster, a 1938 Bugatti coupe and a one-of-a-kind 1930 Mercedes-Benz SSK “Count Trossi” roadster, to name a few.  The 1971 Mercedes-Benz 280SE 3.5 convertible is also kept pristine because it was once Ralph Lauren’s first big ticket item back when became an independent designer.

Here’s an excerpt from Paul Goldberger’s article in Vanity Fair:

…when Lauren, or Reinwald, decides you are to enter the inner sanctum, a button is pressed, an entire panel of the lobby wall slides away, and you are staring a new Lamborghini Reventón in the face. It is the first indication that this is less a garage or a storehouse than a museum installation, since the positioning of the Reventón, one of three 2010 Lamborghinis that Lauren has acquired, is as studied as the placement of the Venus de Milo at the Louvre. The car, made of carbon fiber, has sharp, folded lines, and its front end is both ominous and graceful, as if a fighter jet had been made as a piece of origami. It commands you to pay attention to it. “I went to Italy and fell in love with it,” Lauren told me as we walked past the car and he ran his hand over the dark, matte gray surface. “It’s like a building-the shadows, the light. It’s like Star Wars. Every time I look at it I see something else.”

But the staff of four doesn’t maintain the cars’ pristine condition for nothing. Lauren keeps all of the cars registered and ready, allegedly taking the cars from their white showroom perches and out onto the open road whenever the urge strikes.