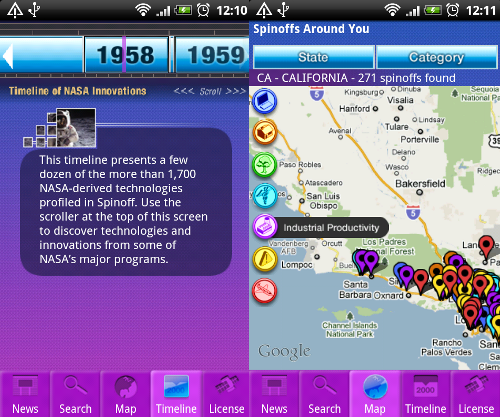 This is one small step for the green robot… One giant leap for NASA. If you happen to be an Android smartphone owner and for some reason feel the need to keep tabs on NASA, the new NASA Spinoff app for your mobile device should keep things stellar.

It’s not quite the same thing as the HD iPad app, instead you get a mobile version of the NASA Spinoff portal, officially from NASA themselves. A timeline of NASA innovations marking historic moments from the organization’s founding in 1958, up to the present. There’s also a Google Maps-powered tab to show where NASA inventions can be found today. The news feed is in the app too.

The billions of dollars of tax payers money spent on the space program every year will ensure you can get the NASA Spinoff App for Android free. Check it out.