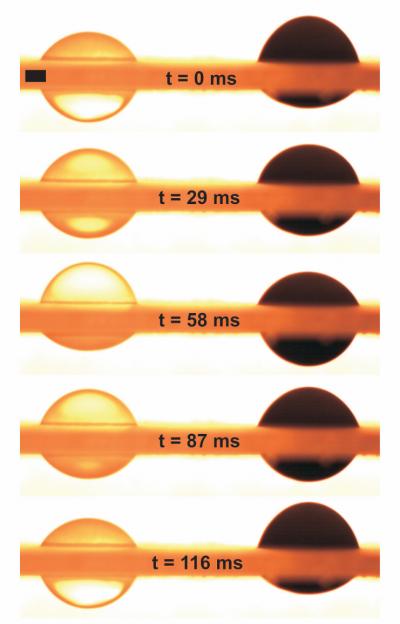 Researchers at Rensselaer Polytechnic Institute have developed liquid pistons which could potentially be used in camera phones and lenses. The liquid piston contains two drops of ferrofluid, which is basically a magnetic liquid, and each drop sits in a hole on a substrate about the size of a piece of chewing gum. The entire device sits in a chamber filled with water. An electromagnet pulse provokes one of the ferrofluid droplets to vibrate back and forth, which in turn provokes its neighbor to vibrate in an inverted pattern, creating a piston.

The researchers suggest that the droplets can function as liquid lenses. The shape of the droplets is always changing because of the vibrations, and by passing light through the droplets, the device works as a tiny camera lens. As the droplets move back and forth, the lens automatically changes its focal length, eliminating the need to manually focus. The images can be captured electronically, and software can be used to edit out the unfocused frames, leaving clear images. The researchers captured the liquid piston at work.

So far, the speed and quality of video the researchers captured from the liquid lenses has passed 30 hertz – the quality of a computer web cam.

The liquid pistons could be used in mobile phone cameras, DSLRs, and medical equipment. Since the “lens” has no motors or any solid parts, it will not suffer wear and tear, and it will enable phone cameras to be smaller and DSLR lenses to be less bulky and heavy.

Hopefully the software can separate the blurry images from the focused ones, because if every other image is blurry, it can be a little annoying when you’re shooting with large file sizes. And as much shoulder pain I get from lugging around my DSLR and my three different zoom lenses, I’m happy with its crystal-clear images. I wouldn’t get a camera with liquid lenses even if it’s cheaper, lighter and uses less energy, unless it could promise the same image quality or better. But it would be great to have better images on my Blackberry’s camera, because then I might actually use it. 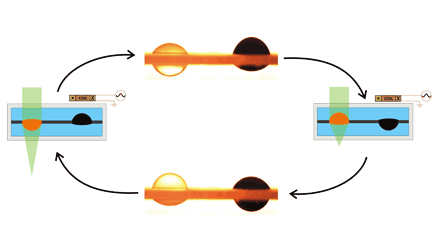 A few companies like Varioptic have developed liquid lenses for use in camera phones, but we have yet to see them on the market.