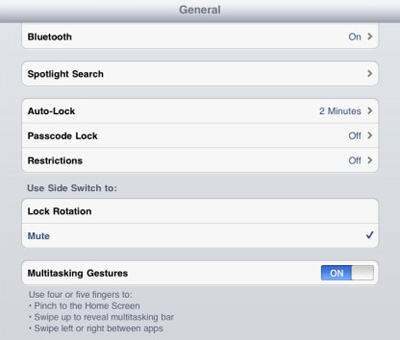 It’s not quite the official release just yet, but the beta version of iOS 4.3 has been made available to developers and it’s pointing toward some notable changes for iPad users. For starters, the functionality of the “side switch” has been tweaked.

In earlier versions of iOS, the “side switch” on the iPad allowed you to set the orientation lock to either landscape or portrait mode. This way, you didn’t accidentally get the display to keep flip-flopping between the two while reading the latest Harry Potter or Twilight book in your Kindle app. With iOS 4.2, the switch activated the mute function.

If you’re the kind of person who wants the orientation lock back, you could be in luck. The beta release of iOS 4.3 is showing that users can configure the iPad side switch to either lock the rotation or activate the mute function.

What’s interesting is that the seemingly simple touchscreen interface could soon be getting even more complicated with the introduction of several four- and five-finger gestures. You can pinch your way back to the home screen, swipe to the multitasking bar, and swipe to switch between active apps. The personal hotspot function seems to be making its way in there too.