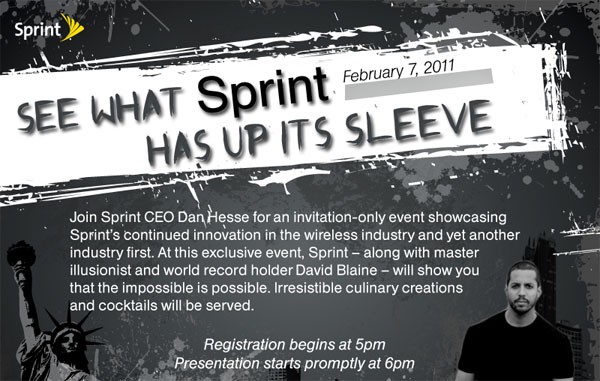 Yes, I am absolutely getting a little ahead of myself here and you should most certainly take my personal conjecture with a huge bucket of salt. Even so, Sprint has really put out an announcement that they’ll be hosting an event on February 7, offering “yet another industry first.”

This is an invitation-only event and it is here that we’ll be able to “see what Sprint has up its sleeve.” Not surprisingly, CEO Dan Hesse is going to be there, but Sprint isn’t coming forward with any more specific details. It’s possible that they’re announcing that the newly revealed CDMA iPhone 4 is on its way to Sprint, but that’s not exactly an industry first. Verizon beat them to that punch.

So, this leaves me with a couple of possibilities. On the one hand, it’s possible that Sprint has managed to lock down the first 4G-equipped iPhone, working with Sprint’s WiMAX network. It’s also possible that the CDMA iPad is coming to Sprint. Going even further, there might even be a WiMAX iPad for all I know.

Then again, it might have absolutely nothing to do with Apple at all. Is there a secret Android phone that was not being shown off at CES? And what on Earth does David Blaine have to do with this thing?