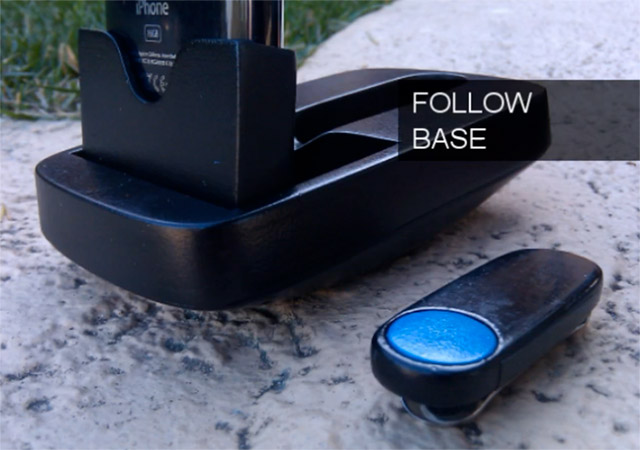 Video recorders on cell phones have come a long way, but for anyone who’s ever tried using one to record a video of themselves, their children, their buddies or anything else know full well that shaky hands are always the same.

Which is why a couple of guys have worked painstakingly in a garage somewhere to invent the Satarii motion phone dock. Which sounds cool, but is actually about 1000 times cooler than it sounds.

It works by using a base to hold your cell phone, with the camera facing yourself. You hold or clip on a small blue marker, and wherever you go, the base will swivel smoothly to keep you in frame. No shakes. No stepping out of the picture. Just smooth panning and killer clips.

The team’s video shows kids doing backyard slaloms, skateboarders attempting to shove it (backside!), FaceTimers video chatting while cooking dinner, presenters using the blue clip as a pointer while presenting. And every bit of video is recorded smoooothly.

There’s one catch: So far, it’s only a prototype. And it’s going to stay that way until they can raise the second half of their $20,000 goal on IndieGoGo.com. If they can pull it off, we’ll be saved from a lot of would-have-been-crap YouTube videos once it starts selling.