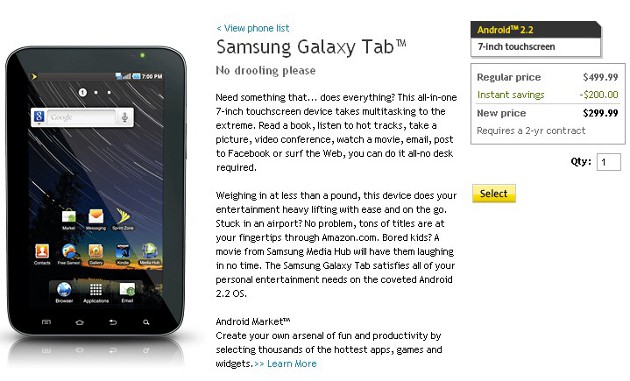 Even though it hasn’t been out for all that long, it seems that the price is starting to take some mild dips on the Samsung Galaxy Tab. Maybe this is because we’re in the wake of an Android tablet overload from the Consumer Electronics Show in Las Vegas. Whatever the case, Sprint has lowered the price on the 7-inch tablet to $299.

That’s the contract price, so you’ll need to latch onto a monthly data plan if you want to get in on Samsung’s Android tablet action via Sprint. Alternatively, you can pick up the exact same seven-incher for $499 sans contract. It’s still loaded with Android 2.2 Froyo, though, so it could easily get outdated very soon.

You have to remember that a whole whack of Honeycomb tablets are expecting to hit the stage over the course of the next few months, not to mention the 4G equipped version of the Samsung Galaxy Tab that is also coming down the pipes. When it comes to technology, you’re always peering at what’s around the corner, but that corner could be awfully close for current Galaxy Tab buyers.

At this point, I think I’d rather wait for the Motorola XOOM or something. That thing is hawt.