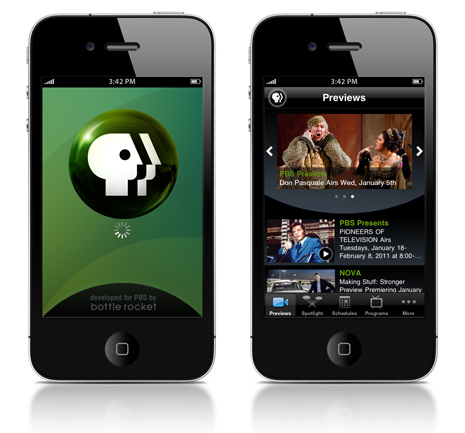 PBS has released the documentary-phile’s iOS holy grail on the iTunes‘ app store.

Maybe that’s a bit of an exaggeration, but it is free. It’s got more than 300 hours of free video. It’s got free full-length programs. Free news from Frontline and PBS Newshour.

“With a huge library from nearly 360 member stations and 1500 public media producers, PBS is delivering a rich on-demand experience and is now one of the first broadcasters to bring full-length video to the iPhone,” said Jason Seiken, SVP, PBS Interactive, Product Development and Innovation. “There has been increasing demand for our content on other platforms – the PBS video player averages 22 minutes viewing time per program among audiences 18+ and ranks 19th among video sites, with more than 104 million streams. In addition, PBSKIDS.org is the #1 children’s video site in streams and unique users, according to comScore.”

Aside from the free video, the app includes scheduling details, previews, and a “tune-in reminder calendar” that can be synced with iCal to make sure you don’t miss your favourite show. Which is no surprise to those who own an iPad, since the iPad version of the app was already available.

But, even though it’s free and has absolutely no reason for such limitations, it’s not available for download in Canada or with a Canadian iTunes account. But then again, you can’t even watch a Toronto Maple Leafs game living in Calgary due to “broadcast restrictions,” go figure.

[Engadget via PBS and iTunes]