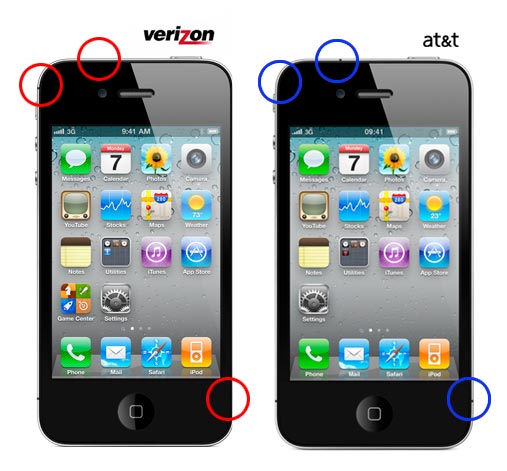 On the surface, you’d assume that the newly announced CDMA Apple iPhone 4 would be virtually identical to its GSM cousin. You’d assume that the only change really was with the cellular radio found within, and you would otherwise be getting the exact same hardware… but is that really true?

Well, for the most part the answer is yes. With Verizon’s iPhone 4 you still get the same retina display and the same “rounded rectangle” form factor that the AT&T version of the iPhone 4 is rocking. There are some critical differences, however, like the lack of a death grip occurring, for starters. This is thanks in part to an altered top antenna bar, as well as the increased robustness of the Verizon network.  As you can see in the image, the external antenna bands are broken up in different places.

Also, unlike the AT&T version, the Verizon version will come pre-loaded with a 3G Mobile Hotspot application. This will work like a standard mobile hotspot, translating your 3G (no LTE yet) wireless connection into a Wi-Fi hotspot for sharing with laptops, iPads, and whatever else. You can connect up to five devices to this hotspot.

And that’s about it. If you’re already familiar with the iPhone 4 via AT&T, you’ll feel right at home with Verizon’s take. In fact, you could be pleasantly surprised by the lack of dropped calls and the inclusion of a native hotspot app.