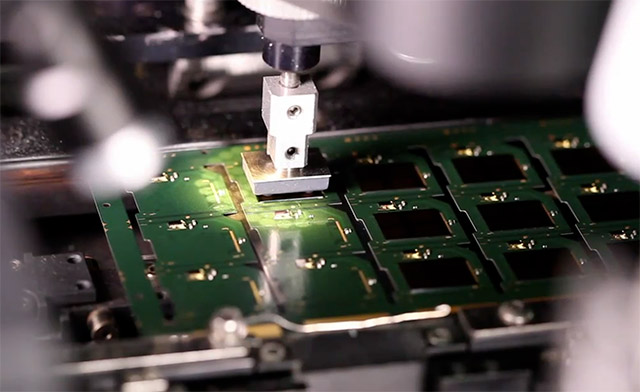 Don’t worry too much about audio when you watch it. As a matter of fact, we recommend you play your own music. The information is all given in a strip of text at the bottom of the screen, one pearl of wisdom at a time, while 6.5 minutes of cheesy 80s-style techno-pop tracks play in the background.

The video, as does the life of a Lexar chip, starts in Lehi, Utah. The Micron Technology factory, which the video states is 100 times cleaner than a hospital operating room and the only one of its kind in America. Thousands of workers take the chips through more than 800 processes over the course of a month – a task that never ceases, but continues 24 hours a day, 365 days per year. 366 on leap years.

In the US the wafers holding memory-chips-to-be are handled by robotic arms, carried around by futuristic little boxes on overhead tracks, shoved into and pulled out of supercomputer-toaster hybrid machines. It seems humans are only involved to supervise the machines, maybe provide a bit of quality control.

But after a month, the wafers hit puberty and are sent off to Asia for assembly. At the plant in Asia, you may notice the people are actually doing things rather than standing around, staring at computer screens while robots zip around oblivious to their existence.

It’s all brought to a close with a few not-Hollywood-quality sequence shots of a lady loading a Lexar chip into her camera, taking a picture with a silly grin on her face.

It’s doubtful the video will be getting any thumbs from Siskel and Ebert, but it does definitely give a new appreciation for what many people view as a throw-away technology.