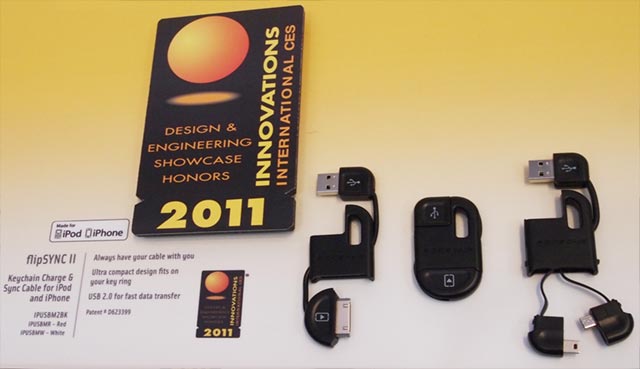 It doesn’t look like much, but this follow-up to the original flipSYNC can retract up a standard iPod/iPhone charge and sync cable into a package that is much more easily handled. Pull out the connects when you need them, fold them back in when you don’t. It sounds so simple, helping you eliminate those messy tangles. Stuff like this is pretty useful when you’re on the road.

In addition to the iPod and iPhone model, the guys at Scosche tell me that they’ve also got microUSB and miniUSB versions of the flipSYNC II. No, this isn’t going to blow you away like the Motorola Atrix 4G would, but I can see how this would be useful.

Similarly, Scosche was showing off a carabiner-equipped version called the clipSYNC. Like the flipSYNC II, it does USB 2.0 for both charging and data synching.