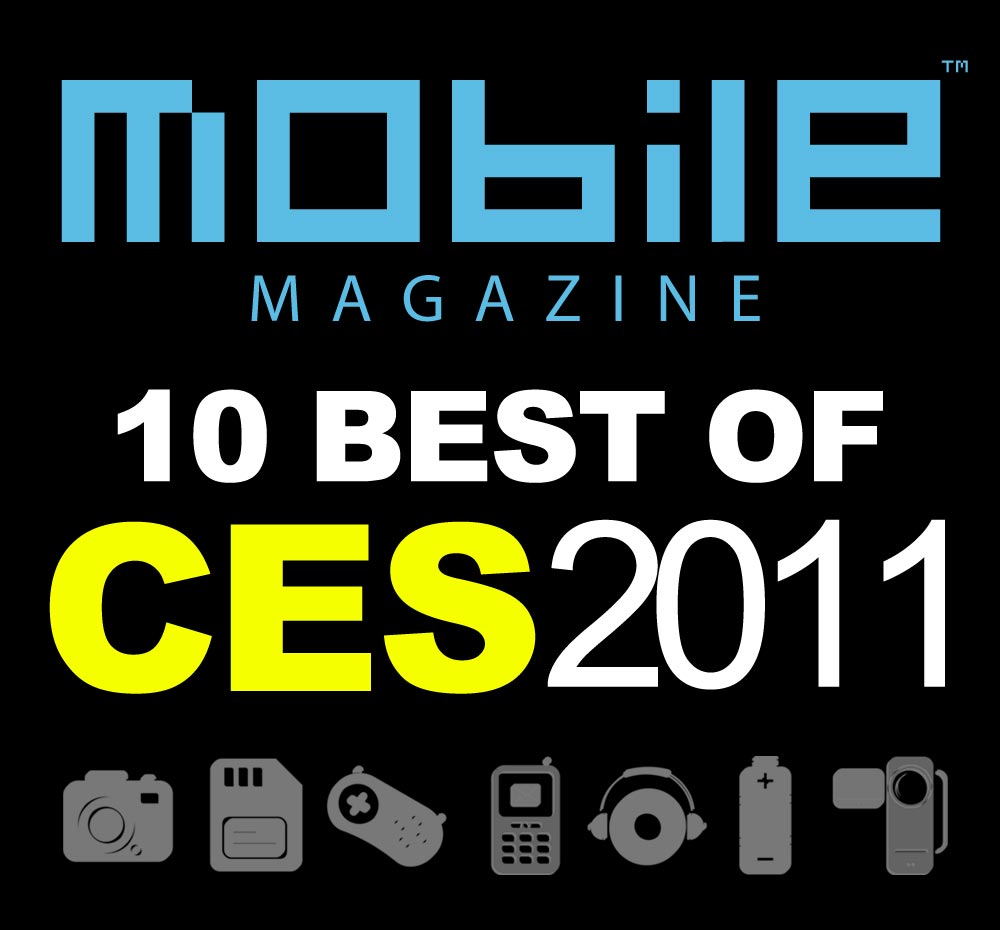 The 2011 Consumer Electronics Show ended this past weekend, but not without leaving a lasting impression of what is to come.  Tablets and smartphones dominated, showing that the future is indeed mobile.   2,700 exhibitors brought an endless onslaught of innovation that collectively attempted to blow the minds of show goers.  Some technologies clearly stood out beyond others, some we thought were just damn cool, and others we know will make a difference in our connected lives. Here’s Mobile Magazine’s list of the 10 Best at CES.

Best Mobile Projector Technology: MicroVision Mini-Tablet Projector
MicroVision’s mini-tablet is basically the Android equivalent of the iPod Touch: A cell phone without cell-phone capabilities, sporting Android 2.2 on its 3.5″ capacitive touch screen. But despite its fare of fairly impressive features – 720p video recording, HDMI I/O ports, etc. – the device was built as a reference for manufacturers who want to include its greatest component in their own devices: The built-in PicoP laser projector. With MicroVision’s PicoP projector engine and laser-scanning technology built right in to the smartphone-sized tablet, the projected images and videos are crisp, clear, and stay constantly in focus even when in motion.

Best Green Gadget: Dexim Visible G Charger
It’s not necessarily groundbreaking or game-changing, but the vampire-killing Visible G charger from Dexim is simple and could actually save the world jiga-watts of electricity.   The electroluminescent charge cable reacts to the electricity passing through, giving you a real time look at electricity.  When your iPhone is finished charging the wall plug is switched off and the cable ceases to pulsate stopping any unnecessary power from being wasted.

Best 3D Camera: Sony Bloggie Duo
The first HD 3D pocket camera. It’s got two lenses, two sensors, two stereo speakers, two screens. You can take photos and video in 1080p 3D or regular old 2D, saving to 4 or 8GBs of internal storage. But what we’re really excited to see is the inevitable wave of creepy or hilarious skins for this thing. Whip out your Bloggie with a Don Knotts face slapped around its two lenses, staring all bewildered. I doubt you’d ever end up with any more serious-faced photos of friends and family.

Best Smartphone: Motorola Atrix 4G with laptop dock
It’s got a 1GHz dual-core NVIDIA Tegra 2 processor with 1GB of RAM, a 4-inch display – QHD 24-bit capacitive touchscreen, giving Apple’s Retina Display a run for its money. Android 2.2 is here for now, with MOTOBLUR and Flash 1o.1. Most notably, a laptop dock with 11.6-inch LCD display. The “Webtop” dock essentially turns your Android handset into the brains running a giant netbook, adding a fully-tabbed FireFox browsing experience (Flash included). This may just be the tipping point in semantics from ‘smart phone’ to ‘genius phone.’

Best Tablet: Motorola XOOM
Apple’s iPad tablet has monopolized the tablet industry since its release in the spring of 2010. Now, almost a year later, Motorola has released a very worthy opponent: The XOOM Honeycomb-based tablet. With a 2GHz dual-core processor, 10.1″ HD display, an array of scopes and meters, cameras and 4G connectivity slated to hit the market before summer, it’s got the right hardware. And running Android’s 3.0 OS, giving access to all of Google’s maps, eBooks and other services, it’s got the right software. For those new Android tablets, this is the measuring stick.

Best Smartphone Case: Mophie Pulse
Mophie’s newest in their line of battery-life-extending protective iPhone cases, the Pulse boasts a couple of entirely new features. For one, the front-facing dual speakers greatly increase the volume of your phone, be it when it’s ringing or playing back your music. But not only does it make your phone’s ringtone easier to hear in your pocket. It actually helps your phone vibrate harder, too.

Best Satellite Technology: Spot Connect
The Spot Connect is designed to give you a data connection on your smartphone anywhere in the world without having to drop big money on a satellite phone. It connects with Spot satellites, pairs with your smartphone via Bluetooth, and effectively gives it enough of a connection for you to communicate with the world. The good: You’ll be able to send out text messages, check your email, and even update your Facebook and Twitter accounts. The bad: No voice calls, $100/year basic service and only 41 characters per text.

Best Notebook Innovation: Samsung PC 7 Series
The 10.1″ tablet/notebook hybrid may not have the XOOM’s specs or the PlayBook’s portability, but the genius in Samsung’s PC 7s is the dockless tablet-to-notebook transition. When closed, it appears more or less like you would expect a tablet to, showing little more than the multi-touch display and a Samsung logo. But slide the screen up, and it reveals a full QWERTY keyboard and trackpad, giving you not only the option of orientation, but interface, as well.

Best iPad Accessory: iCade Arcade Cabinet Dock
For anyone who misses the arcade days, you can now have the entire arcade in one cabinet with Ion Audio’s iCade iPad dock. Sporting a Bluetooth joystick kit and old-fashioned particle-board construction and groovy retro graphics, it uses your iPad as the screen of a miniature arcade gaming cabinet. If you can’t find the game you’re looking for in Atari’s library, apps can be “easily updated to work with iCade.”  We’re hoping to tap out a bit of shoryuken.