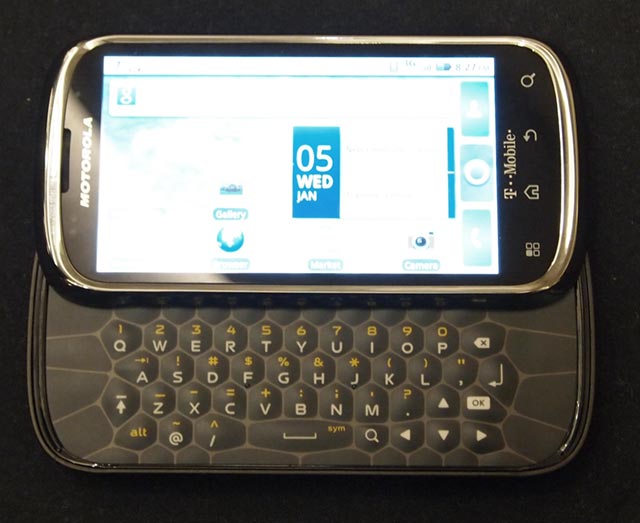 The Motorola Atrix 4G and Motorola XOOM tablet might be taking center stage, but you shouldn’t forget about the Motorola CLIQ 2 either.

As you may have heard, this is the official follow-up to the original CLIQ and it’ll be heading in the same magenta-hued direction of T-Mobile on January 19th. I went hands-on with the device and it’s pretty much what you would expect with a 3.7-inch display, Android 2.2 Froyo, and the MOTOBLUR custom UI.

No, it’s not the slimmest phone in the world, but I really thought they took an interesting approach with the slide-out keyboard. It’s almost in a honeycomb-like layout (though, since it’s not a tablet, it’s not running on Android Honeycomb), with soft bouncy keys. Each key is slightly domed, giving you a better feel for where you are. It was remarkably comfortable to use, but I almost wish the keys had a little more “clack” to them. That’s just a personal preference.

The hardware doesn’t feel particularly high-end, but you have to realize that the CLIQ 2 is supposed to be more of a mid-tier device. It has good weight and responsive touch controls, but I still think I’d opt for the T-Mobile G2 (Desire Z) if I was going for Android on T-Mo. Or, you know, just go 4G.