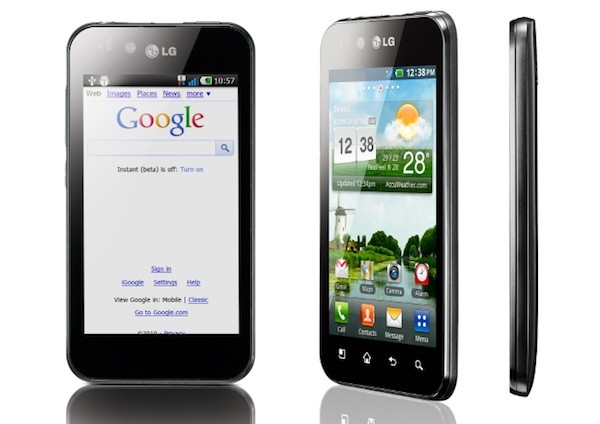 The technology pendulum never stops swinging. There was a time when the race was on to make the smallest phones possible and then manufacturers went off Atkins and they all blew up into today’s smartphones. LG is swinging back the other way with their latest and thinnest: the Optimus Black.

While it’s no Motorola Razor, Optimus Black has shown up at CES at only 9.2mm thick — which makes it the world’s thinnest “mobile device” (for now) — having just eeked out the iPhone’s 9.3mm. She also tips the scales at only 109g, which is feather-light for this category (by comparison the iPhone is 137g). LG hasn’t sacrificed what’s important to users to hit these benchmarks as it boasts a 4-inch NOVA screen which makes it easy to view in direct sunlight.

It will have a front-facing camera built-in too for those who love the video chat, alongside a 5 megapixel rear camera, and will also be the first smartphone with Wi-Fi Direct. Other than that LG is pretty shy on the details so we don’t know what kind of engine is powering this skinny little thing, but keep your eyes peeled as further details should emerge during Q1.

Apparently coming out in the first half of 2011 Optimus Black is something to look forward to but for some unknown reason it will be launched with Android 2.2 (Froyo) instead of being sent direct to market with 2.3 (Gingerbread).

So now that LG has set the new benchmark for “thin” we have a feeling the other smartphones at CES will be skipping the Bellagio’s all-you-can-eat buffet, at least for a few meals.

Available for the first time in the mobile market, LG Optimus Black’s NOVA display is designed to be the brightest, clearest and most readable among mobile screens with 700 nits of brightness for optimal visibility. LG Optimus Black provides users with an easier and more natural experience when browsing the web, reading emails, or writing documents with higher levels of brightness and pure white tones that deliver true black and white colors for ideal handset viewing. NOVA technology featured on LG Optimus Black also enables users to maintain visibility whether indoors or outdoors under strong sunlight.

In addition to greater luminosity, the NOVA display on LG Optimus Black also radically reduces power consumption by 50 percent during general indoor use compared to a conventional LCD. Similarly, AMOLED consumes twice as much power as NOVA to display a full white screen, the most frequently used color scheme for web browsing. Combined with the 1500 mAh battery of the LG Optimus Black, users will have enough power for their daily needs, even at maximum brightness settings.

Users will never be out of style with the LG Optimus Black’s ultra slim 9.2 mm design. Making a strong visual statement, LG Optimus Black weighs only 109g and offers sleek lines and smooth edges that improve handheld grip. Tapering down to the world’s thinnest smartphone profile of 6.0 mm, LG Optimus Black’s subtle back arch helps to create the illusion of even greater slimness. Unique to the LG Optimus Black, the flush and flawless finish of the front display is achieved by innovatively hiding the Invisible Receiver behind the edges of the phone.

“We are excited to introduce this stylish new Android smartphone and expect the LG Optimus Black to play a key role in the mobile market,” said Dr. Jong-seok Park, President and CEO of LG Electronics Mobile Communications Company. “LG Optimus Black reflects our core strengths of advanced technology, in both display and design, offering the world’s brightest screen and the world’s slimmest design in an attractive and smart package.”