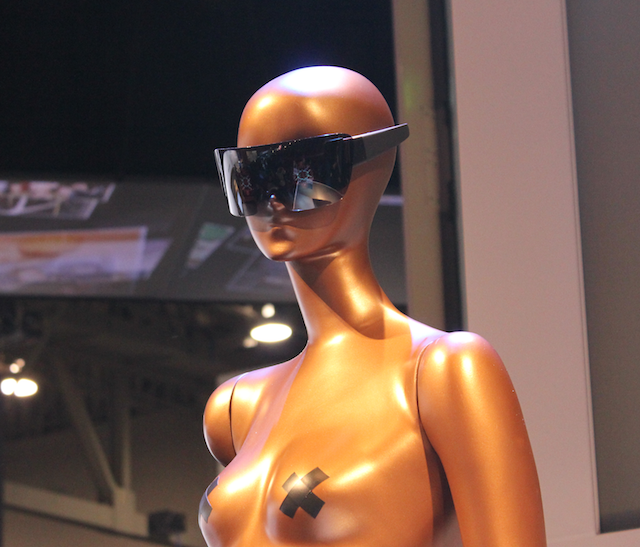 OK, it’s a neat idea: Shades with a cellphone-style camera in the bridge for taking photos and video. But give that neat idea to Lady Gaga for design, and the Polaroid GL20 sunglasses are the inevitable end result as seen at the CES.

Vaguely resembling a protective face shield or welder’s helmet, the first thing you’ll notice about Polaroid’s new Grey Label camera glasses is definitely not the face of the person under them.

You will, however, notice that the built-in LCD screens, made to display photos and video to those looking at your face, shift your face’s focal point (the eyes, when not obscured by a gray plastic cookie sheet) down to your cheekbones, subconsciously giving the illusion that the face beneath is slightly deformed.

And, if you’re still looking at these things, you’ll realize that since the LCD screens are about the middle of the shades, but are meant to sit below the eyes, the shades have to sit a bit low on the face. That won’t work very well for keeping the afternoon sun from shining straight in through the massive gap between the lenses and your eyebrows.

Other notable downsides of these sunny monstrosities? You probably won’t be able to see your feet or what you’re about to step on. It’s probably safe to assume The light from the screens will reflect off the insides of the lenses if you’re wearing them at night. And they’re actually set to release by spring this year.

It’s probably best to just stick with the camera on your cell phone. Polaroid’s marketing team probably asked, “how can we get Lady Gaga in on CES?”