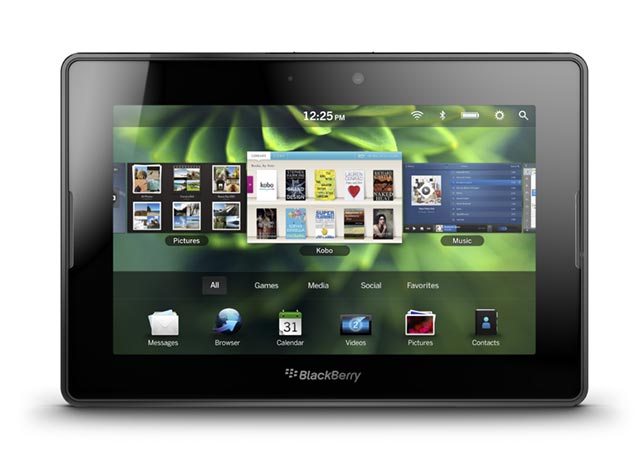 What great news for Sprint customers. Today down the CES vine came word that RIM and Sprint will be offering the BlackBerry Playbook “in the summer.” Now we’re hoping July the latest, but you never know, it could be as early as the end of June. We were expecting a 4G PlayBook (Sprint claims 10x faster than 3G) release in the first quarter of 2011, however, a rumored less than acceptable battery life may have caused the release date to be pushed back to this summer. No word on price just yet.

The BlackBerry 4G PlayBook is a professional-grade tablet that’s set to redefine the possibilities of mobile computing, giving users an ultra-portable design with industry leading performance, uncompromised web browsing, true multitasking and HD multimedia, as well as advanced security features and out-of-the-box enterprise support. Together, the BlackBerry 4G PlayBook and the Sprint 4G network will provide a high performance platform that will enable a mobile services revolution for both application developers and customers.

“RIM believes a significant portion of the tablet market will want a higher performing, multitasking, professional-grade tablet and that is why we chose to design the BlackBerry PlayBook for premium performance with a powerful dual-core processor and multitasking OS. Together with Sprint, we are now building on that performance advantage with 4G and providing an unparalleled mobile experience for users,” said Mike Lazaridis, President and Co-CEO at Research In Motion.

”We are excited to bring this powerful new product to our business customers and consumers who rely on Sprint for industry-leading devices as well as one of the best values in wireless,” said Steve Elfman, president of network operations and wholesale for Sprint. “This tablet is a great example of Sprint’s strong partnership with RIM in continuing to bring customers powerful devices to enhance their mobility. We are confident the BlackBerry 4G Playbook from Sprint will be one of the most anticipated tablets in 2011.”

In addition to Wi-Fi® support, the BlackBerry 4G PlayBook features a 1 GHz dual-core processor, 1 GB of RAM and the new BlackBerry® Tablet OS. The ultra portable, ultra thin tablet will offer an uncompromised, high-fidelity web experience with support for Adobe® Flash® Player 10.1, Adobe® Mobile AIR® and HTML-5 enabling customers to enjoy all of the sites, games, media and richness of the full Internet, delivered at 4G speeds. Additional details and pricing will be released closer to launch.

For more information about the BlackBerry 4G PlayBook, visit www.blackberry.com/playbook or www.sprint.com/4Gplaybook.

About Sprint Nextel
Sprint Nextel offers a comprehensive range of wireless and wireline communications services bringing the freedom of mobility to consumers, businesses and government users. Sprint Nextel served more than 48.8 million customers at the end of the third quarter of 2010 and is widely recognized for developing, engineering and deploying innovative technologies, including the first wireless 4G service from a national carrier in the United States; offering industry-leading mobile data services, leading prepaid brands including Virgin Mobile USA, Boost Mobile, Common Cents Mobile and Assurance Wireless; instant national and international push-to-talk capabilities; and a global Tier 1 Internet backbone. Newsweek ranked Sprint No. 6 in its 2010 Green Rankings, listing it as one of the nation’s greenest companies, the highest of any telecommunications company. You can learn more and visit Sprint at www.sprint.com orwww.facebook.com/sprint and www.twitter.com/sprint.

About Research In Motion
Research In Motion (RIM), a global leader in wireless innovation, revolutionized the mobile industry with the introduction of the BlackBerry® solution in 1999. Today, BlackBerry products and services are used by millions of customers around the world to stay connected to the people and content that matter most throughout their day. Founded in 1984 and based in Waterloo, Ontario, RIM operates offices in North America, Europe, Asia Pacific and Latin America. RIM is listed on the NASDAQ Stock Market (NASDAQ: RIMM) and the Toronto Stock Exchange (TSX: RIM). For more information, visit www.rim.com or www.blackberry.com.

Forward-looking statements in this news release are made pursuant to the “safe harbor” provisions of the U.S. Private Securities Litigation Reform Act of 1995 and applicable Canadian securities laws. When used herein, words such as “expect”, “anticipate”, “estimate”, “may”, “will”, “should”, “intend,” “believe”, and similar expressions, are intended to identify forward-looking statements. Forward-looking statements are based on estimates and assumptions made by RIM in light of its experience and its perception of historical trends, current conditions and expected future developments, as well as other factors that RIM believes are appropriate in the circumstances. Many factors could cause RIM’s actual results, performance or achievements to differ materially from those expressed or implied by the forward-looking statements, including those described in the “Risk Factors” section of RIM’s Annual Information Form, which is included in its Annual Report on Form 40-F (copies of which filings may be obtained at www.sedar.com or www.sec.gov). These factors should be considered carefully, and readers should not place undue reliance on RIM’s forward-looking statements. RIM has no intention and undertakes no obligation to update or revise any forward-looking statements, whether as a result of new information, future events or otherwise, except as required by law.

The BlackBerry and RIM families of related marks, images and symbols are the exclusive properties and trademarks of Research In Motion Limited. RIM, Research In Motion and BlackBerry are registered with the U.S. Patent and Trademark Office and may be pending or registered in other countries. Wi-Fi is a registered trademark of the Wi-Fi Alliance. All other brands, product names, company names, trademarks and service marks are the properties of their respective owners. RIM assumes no obligations or liability and makes no representation, warranty, endorsement or guarantee in relation to any aspect of any third party products or services.