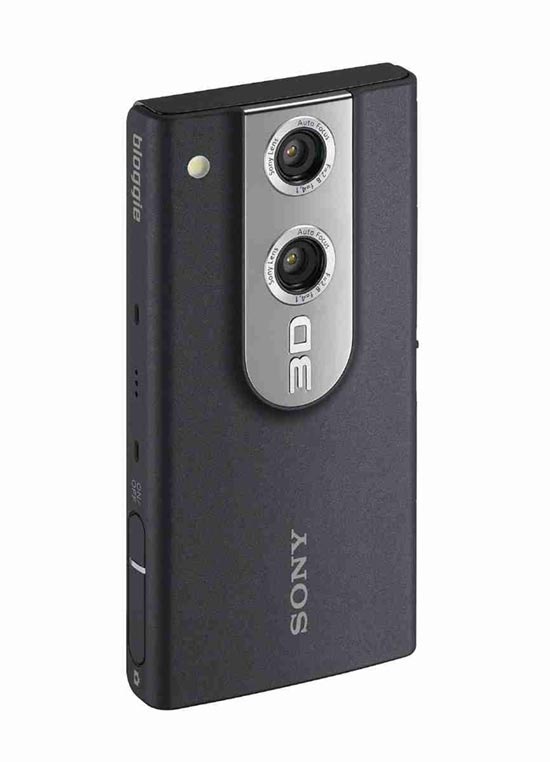 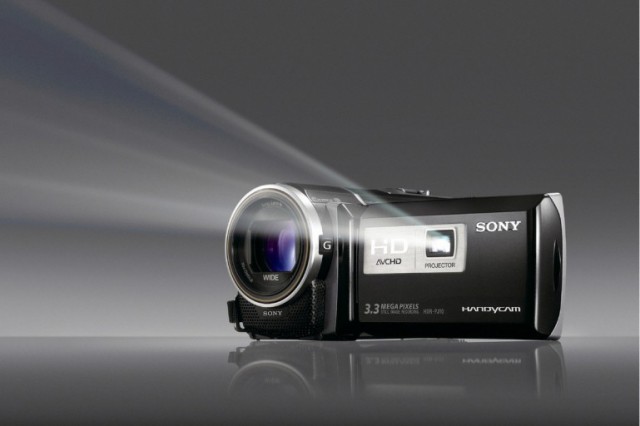 Sony is going all-out at this year’s Consumer Electronics Show, revamping their cameras and camcorders with 3D, HD, HD3D, built-in projectors – basically everything you would expect if R2D2 shagged with your Flip and made benderesque little camcorder babies.

I’m thinking they should have spoken with Kingston during development, since they just announced a brand new, super-high-speed class of UltimateXX SD cards that these cameras would have benefited from.

In the camcorder line, Sony’s grabbed another “world’s first” title with the HDR-TD10: The world’s first “Double Full HD” 3D consumer camcorder. Integrated dual Sony-G lenses, Exmor R CMOS sensors, and even two BIONZ image processors pump out 3D video in 1920×1080 full-HD resolution. It’s got 64GB of internal storage, and like the Bloggie, you can play back video in 3D without glasses on the built-in LCD.

If you’re not into the whole 3D thing, you can skip the second lens and grab a Handycam with a built-in projector instead. The HDR-PJ50V still films in HD, but lets you show off your movies on the wall up to a 60″ screen-size equivalent from 18 feet away.

But that’s not even the half of it. Their 2000-word press release also announces a single-lens camera capable of taking 3D photos, a pocket camera with 1920×1080 HD video; one is waterproof, shockproof, dustproof, freeze-proof and offers HD movie and 3D photo capture.

Looks like it’s been a busy year in the Sony labs.

Adding to Sony’s breadth of 3D products, the HDR-TD10 is the world’s first “Double Full HD” 3D consumer camcorder. The camcorder employs an integrated dual lens system, which includes two of each key component—double Sony G Lenses, double “Exmor R” CMOS image sensors, and double BIONZ® image processors. The dual recording system allows 3D content to be recorded in 1920×1080 resolution Full HD. The content can be played back on 3D-capable HDTVs with 3D glasses or in Full HD 2D on non-3D displays. In addition, the 3D footage can be viewed in 3D without glasses on the camcorder’s 3.5-inch 3D touch screen LCD. Providing 64 GB of flash memory, the HDR-TD10 will be available in April for about $1,500.

Handycam camcorders with built-in video projectors offer the ultimate playback experience, even on the go. A compact, LED-based projector is built into the 3-inch flip-out LCD panel, maintaining the camcorder’s compact size and allowing video and images to be projected at up to 60 inches (diagonally) onto walls, ceilings or other flat surfaces.

Combined with powerful stereo speakers with Clear Phase and S-Master digital amplifier, the integrated projector provides a whole new way to enjoy video playback without needing to plug into an HDTV. The HDR-PJ50V with a 220 GB hard disk drive and HDR-PJ10 with 16 GB of flash memory will be available for about $1,000 and $750, respectively.

On the other end of the video spectrum, Sony’s affordable and fun Bloggie HD camera line welcomes three models that each brings distinct value to the category.

Recorded content from the MHS-FS3 can be played back in 3D without glasses on the camera’s 2.4-inch LCD screen or on any 3D capable HDTV with glasses.

The portable HD camera lineup also offers a dual-screen option dubbed the Bloggie Duo camera (MHS-FS2). The slim camera features two vibrant LCD screens—2.7-inch on the back and 2-inch on the front—for new ways to capture yourself and others in full HD video or 5.1-megapixel photos. The Bloggie Duo camera has a built-in LED light and comes in different fashionable colours including violet, green, and pink.

An entry model completes the trio of Bloggie introductions, offering on-the-go video lovers a smart, pocket device at a low price point. The MHS-FS1 sports an ultra compact, lightweight design with a large 2.7-inch LCD screen and comes in black and white.

(DSC-TX100V, DSC-TX10, DSC-HX7V, DSC-WX9 and DSC-WX7) that are the world’s first compact digital still cameras to include 3D Still Image mode for taking 3D images using only one lens and imager. They also have innovative Dual Rec (record) technology for taking still photos during video capture.

The DSC-TX100V camera is the world’s first compact digital still camera to include full HD (1920 x 1080/60p) video capability for smooth playback while recording action shots such as sports.

It is also the first Cyber-shot with a 3.5-inch touch screen with OLED that provides deeper blacks and more vibrant color contrast while being thinner than most LCDs.

With Sony’s “Exmor R” Back illuminated CMOS sensor technology, these models provide excellent low-light performance, up to 10fps burst shooting and the Intelligent Sweep PanoramaTM feature. These cameras with CMOS sensors will range from $250 to $430 and will be available in March.

Sony also introduced a fresh, sleek addition to its world-class all-touch-screen T-series cameras (DSC-T110) that combine the must-have ultra slim design factor with all the cutting-edge features the in-crowd demands.

Starting with the entry-level DSC-T110, the T-models feature a 3-inch LCD touch screen, Sweep Panorama mode and 720p HD movie capture. The DSC-T110 camera will be available in March for about $240.

Sony also introduced a new 10x optical zoom Cyber-shot camera (DSC-H70). With a 16-megapixel CCD sensor, it has the innovative Sweep PanoramaTM feature, 720p HD movie recording, Optical SteadyShotTM and a 25mm wide lens. The DSC-H70 will be available in April for about $250.

Sony today debuted its next-generation multi-function Blu-ray DiscTM/DVD recorder, which can easily transfer high-definition AVCHDTM home videos as well as digital photos to Blu-Ray Disc/DVD media. It can also record standard-definition home videos on tape media to DVD via an analog input—all without using a computer.

The new VBD-MA1 model has a 2.7-inch color LCD screen for previewing video or up to six digital photos at a time, and its overall size is almost 20 percent slimmer than the current model (VRD-MC6).

The VBD-MA1 has a wide compatibility with Sony’s Handycam camcorders, Cyber-shot cameras, α cameras, select non-Sony camcorders and almost all video tape devices such as VHS, miniDV and Hi8. Also, the VBD-MA1 model can connect to a PC via USB2.0 and be used as an external Blu-ray Disc writer.

Up to 19 hours and 20 minutes of HD video or up to 6,000 digital pictures can be recorded on a 50GB double layer Blu-ray Disc media. The new VBD-MA1 model maintains Dolby Digital® 5.1 surround sound as well as 4:3 and 16:9 aspect ratios with compatible camcorders.

The DVDirect® VBD-MA1 recorder will be available for about $350 at Sony Style® stores and other major retailers around the country in April.

Sony today introduced a new AVCHD movie application based on the Playstation®3 system called Filmy, which stands for “my film.”

Designed to view your AVCHD files in various ways, Filmy provides quick search and easy playback of all your treasured AVCHD video memories on PS3®. It will be available as a download application to the PS3TM system from the PlayStation Network Store in February 2011.

Press releases are available for the news media at Sony Canada news and information web site at www.sony.ca/presscentre

Members of the media can download digital images at http://www.flickr.com/groups/sonycameraclub

For videos from the Sony Booth at CES, visit www.youtube.com/user/SonyConvergineer

* MP4 based consumer digital camera is capable of recording vertical resolution of 1080 as of January 5, 2011.

About Sony of Canada Ltd.

Sony is one of the most comprehensive entertainment companies in the world with a portfolio that includes electronics, music, movies, games and online businesses.

With headquarters in Toronto, sales offices in Vancouver and Montreal and distribution centres in Coquitlam, British Columbia, and Whitby, Ontario, approximately 1,000 employees support a network of more than 500 authorized dealers and 62 Sony Style retail locations across Canada.

Sony Canada is devoted to the betterment of children, the environment, and the community. Through the Sony Canada Charitable Foundation (SCCF), Sony Canada aims to maximize its support of charitable and philanthropic organizations, including Make-A-Wish® Canada, the United Way of Canada and Earth Day Canada.

To view this news release in HTML formatting, please use the following URL: http://www.newswire.ca/en/releases/archive/January2011/05/c8612.html