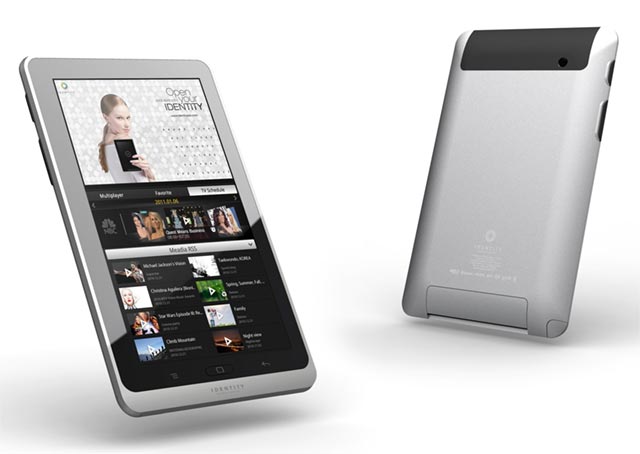 Just because you want to join in on the all the tablet fun doesn’t mean you need to break the bank. I’ve never heard of Enspert before, but the company’s new line of Android tablets just might catch your eye.

Announced at CES 2011, the IDENTITY line of tablets from Enspert are supposed to bring affordability to the Android realm without sacrificing much in functionality or quality. If you only need WiFi, you can get the IDENTITY tab E201, for example.

Adding 3G to the mix is the IDENTITY E301, while the E302 does the WiMAX thing for Europe and Asia. Both the E301 and the E302 come preloaded with Android 2.3 Gingerbread. Yeah, there’s no Honeycomb here, but you knew you had to sacrifice somewhere.

Enspert is based out of Korea and they didn’t offer anything in terms of pricing in the press release. They do mention that the E201 will be ready in early 2011 with the E301 following up “shortly after.” They plan on offering that through “a leading US wireless carrier in time for the 2011 back-to-school season” too.

Enspert marries the latest in portable mobile technology with elegant and fashionable devices that express the way we live and work today. In addition to the IDENTITY tab collection, the 2011 IDENTITY line features an ecosystem of smart connected devices that leverage the open-source Android operating system including smartphones, multi-device media convergence hubs, VoIP and SoIP systems, mobile hotspots and more. The new lineup of IDENTITY devices is available for demo at 2011 International CES in the South Hall Upper Level & Connector, booth number 36218, from January 6-9.

“In addition, Enspert will be offering a sneak peek at future tablet devices and presenting our vision of the tablet market at CES,” continued Lee.

“We’re looking forward to demonstrating the latest Enspert technology at CES and expanding our presence into the U.S. and beyond,” said Sang-su Lee, president of Enspert. “The IDENTITY tab E201 has already been released in Korea with KT, Korea’s leading wireless carrier, and is one of few tablets commercially available through a wireless carrier. Global market demand for Enspert devices will expand rapidly starting with entry into the North American market in January and distribution announcements with some of the continent’s most prominent distributors will follow shortly after.”

Enspert is a media convergence solution and device provider facilitating 3 screen services including Convergence Network Solutions, 3-Screen SW Platforms, Multimedia Solutions, Embedded S/W, and IP-based devices, such as DMB, VoIP/SoIP, WiBro/WiMax, and Tablet/SoIP/VoIP and MID devices. It also develops world-class technologies for SoC, such as an embedded multi-processor design, hardwired multi-standard audio/video codecs, baseband modems and design technologies for low power and testability. Since its inception in 2006, Enspert has developed partnerships with global carriers and manufacturers helping the company to become a leader in the Korean media convergence device marketplace and accelerate international expansion in the Americas, Europe, Asia, etc. Enspert is a subsidiary of Insprit, a convergence solutions provider, publically traded on the KOSDAQ exchange, No.: 098400 in Korea. The company is based in Seoul, Korea.