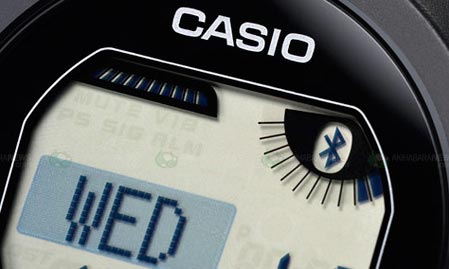 So we’ve seen a few attempts to meld cell phones and watches in recent years and usually the result is expensive, clunky and never really takes off. But engineers at Casio are taking the iterative approach with a new prototype.

Rather than try and smash the two together, their new prototype pulls a few bits of information from your smartphone and puts them on your wrist. Bluetooth technology weds alarm information from your phone and can notify you of email alerts. And we really like the feature that lets you press a button to stop your phone from ringing. It also syncs up with your phone to set the date and time which is kind of cool.

The technology on the backend is the new Bluetooth Low energy standard (aka Bluetooth 4.0) which thanks to its low energy demands provides a reported battery life of two years! On the downside it won’t work with existing smartphones as none of them have the new hardware required to support this standard.

So while we think some of these features are kind of cool and we’re thankful that Casio didn’t try and ram a watch-based twitter app down our throat it should be noted that it’s just as rude to check your watch in the middle of a meeting as it is to check your phone when an email comes in. 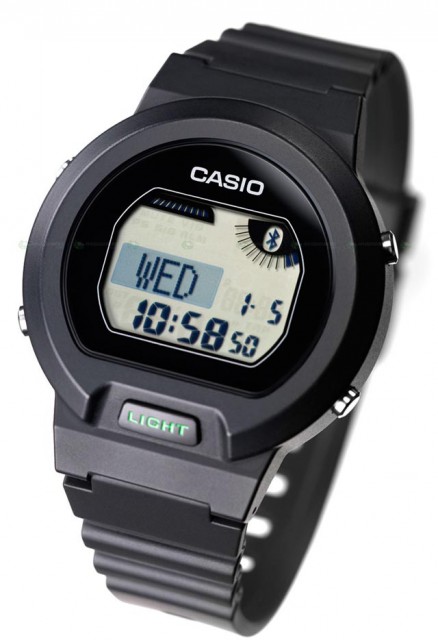 LAS VEGAS, JANUARY 5, 2011 — Casio Computer Co., Ltd., announced today that it has developed a watch using Bluetooth® Low Energy (BLE) technology, the new low-power-consumption version of the short-range wireless networking standard*. A prototype of the watch, sharing a two-way data link with a smartphone, will be exhibited at Casio’s booth (#11006) at the International Consumer Electronics Show to be held at the Las Vegas Convention Center from January 6-9, 2011.

Casio has been redefining the wristwatch for years by applying the latest technologies. Now, Casio’s application of BLE positions the company to create new possibilities for the way people use their watches. Taking advantage of the low power consumption of BLE, the new watch powers wireless communication functions with a single, ordinary button-cell battery, and without consuming any more battery life than a conventional wristwatch. Users can wear it every day just like they normally do, without the hassle of recharging which is required by typical mobile devices. Battery life is estimated at approximately two years based on the prototype model, assuming that the Bluetooth wireless communication function is used for 12 hours per day.

Casio’s new prototype communicates with BLE-equipped smartphones, which will be available in the near future and will connect to networks of various kinds of devices. As the wireless link between smartphones and watches gains in adoption, and as the universe of smartphone applications continues to grow, Casio expects to see new possibilities for watches in everyday life.

Casio aims to produce its first Bluetooth Low Energy Watch in 2011. Meanwhile, Casio will call for partner companies to develop applications compatible with smartphones and other household devices in such areas as sports, health, home entertainment, security, and communication with family and friends.

The alert signal notifies the wearer of calls and e-mail messages arriving on the networked smartphone
Alarm and vibration functions of a smartphone can be activated using a watch button
A smartphone’s ring and vibration alerts can be stopped by tapping the watch
Accurate time information can be transmitted from a smartphone to the watch to ensure correct time
Casio’s demonstration of the Bluetooth Low Energy Watch uses a prototype of a Bluetooth Low Energy smartphone. The demonstration will be conducted at Casio’s Booth (#11006) at 2011 International CES, in cooperation with NEC Casio Mobile Communications.

About Casio Computer Co., Ltd.
Casio Computer Co., Ltd. is one of the world’s leading manufacturers of consumer electronics products and business equipment solutions. Since its establishment in 1957, Casio has strived to realize its corporate creed of “creativity and contribution” through the introduction of innovative and imaginative products. Today, Casio’s offerings include timepieces, digital cameras, electronic dictionaries, calculators, musical instruments, system equipment, and electronic components such as LCDs. The Casio Group employs more than 12,000 people worldwide, shipping over 100 million products per year, with net sales of 427 billion yen (approx US $4,601 million) in the fiscal year ended March 2010. News and product information from Casio is available at http://world.casio.com/