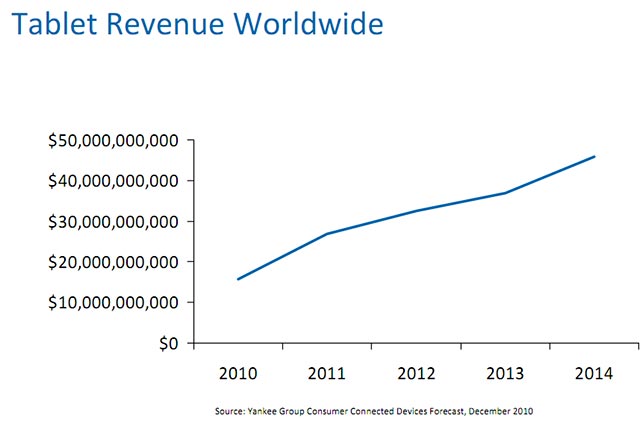 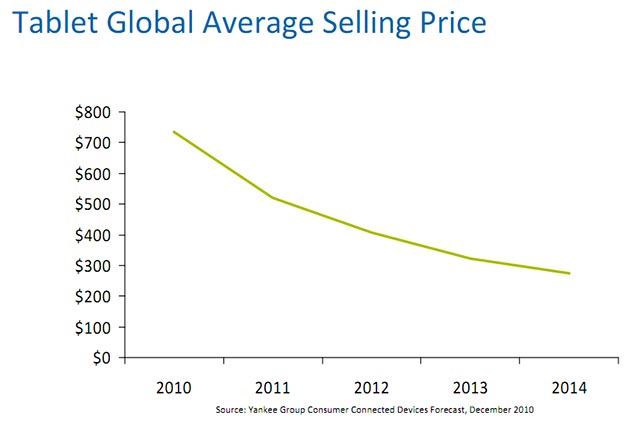 That’s even taking into account the prediction that tablet prices will fall to half over the next four years, averaging $237 in 2015.

The company will be releasing a full report this week, titled “2011 US Tablet Forecast: A Rising Tide Lifts All Boats.”

The Boston-based technology researcher Sarah Rotman Epps of Forrester Research says the tablet market is growing rapidly. Not only are we seeing dozens of new tablets hit the market at CES, these new devices are expected to reach 10.3 million U.S. consumers this year alone and 82 million in 2015.

“When Apple’s iPad first debuted, we saw the device as a game-changer but were too conservative with our forecast. Since then, we’ve fielded additional consumer surveys and a SMB and enterprise survey, conducted additional supply-side research, and seen more sales numbers from Apple,” Rotman Epps wrote.

“2011 US Tablet Forecast: A Rising Tide Lifts All Boats”
“The growth in this market is unprecedented,” said Dmitriy Molchanov, Yankee Group analyst and author of the forecast. “The tablet sales curve is rising faster than that of HDTVs, handheld gaming consoles or even MP3 players.”

Yankee Group will release a companion report this week, “2011 US Tablet Forecast: A Rising Tide Lifts All Boats,” predicting that in 2015, the U.S. tablet market alone will generate more than $7 billion in revenue.

Key global and U.S. findings include:

In 2010, North America leads the way. The region accounts for 37 percent of total global tablet revenue.
By 2014, Asia-Pacific is the front-runner. The region, primarily China, will own more than half the global market (58 percent), while North America’s share will drop to just 17 percent.
Annual U.S. tablet sales will more than triple between 2010 and 2015. Tablet sales will grow at a CAGR of 31 percent, from roughly 8 million units in 2010 to 30 million units by 2015.
The average tablet price tag in the U.S. will drop to just $237 by 2015. Reference models, open source OSs and economies of scale in touch-screen manufacturing will help cut the average selling price in half over the next few years.
Attendees of CES may download a free snapshot of the global tablet forecast at http://web.yankeegroup.com/2011TabletForecastSnapshot-Registration.html.

The people of Yankee Group are the global connectivity experts–the leading source of insight and counsel trusted by builders, operators and drivers of connectivity solutions for 40 years. Headquartered in Boston, Yankee Group has a global presence, including operations in Europe, the Middle East, Africa, Latin America and Asia-Pacific. Visit www.yankeegroup.com.