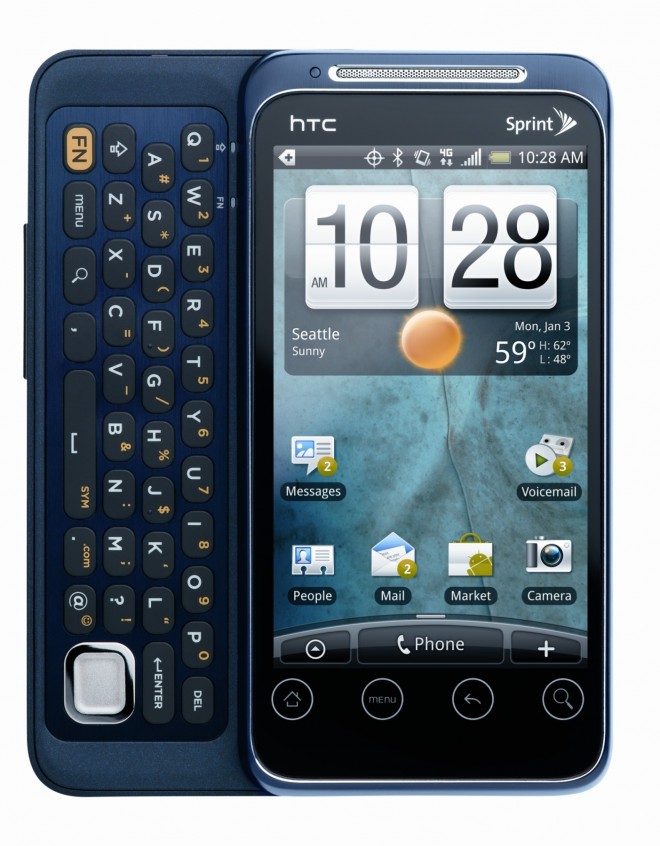 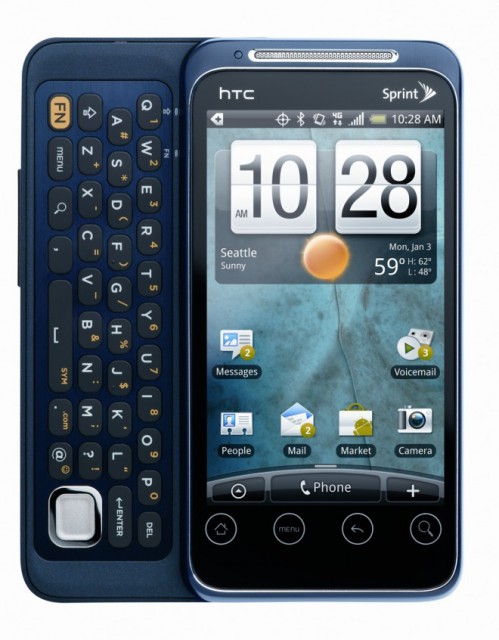 Sprint is using the CES spotlight to introduce us to the new EVO shift, a scaled-down version of last-year’s giant EVO.

Running on the 4G network, EVO Shift and its predecessor are both lightning fast but HTC has sacrificed a few things to bring us this slimmed-down version. The 3.6” captive-touch screen display is still large enough but trimmed down from the original EVO’s 4.3”. This sacrifice may have been made in part to accommodate a slide-out QWERTY keyboard, a feature not offered on the original EVO.

EVO Shift is going to ship with Android 2.2 (Froyo) which seems odd given that Android 2.3 (Gingerbread) source code has been available for a few weeks and HTC could have put that to good use for this launch. The Shift naturally comes equipped with a camera but ringing in at 5 megapixels it’s a significant downgrade from the original EVO’s 8 megapixels. We were also a little disappointed that on a phone designed for a 4G Network there was no front-facing camera to allow users to take advantage of video chatting. Moreover, the processing speed was knocked down a good 20%, running at 800 Mhz versus the bigger EVO’s 1Ghz.

Retailing at $150 after the mail-in rebate and a two year contract the price isn’t outrageous but with the screen is smaller, slower processor and lower resolution camera we’re not really sure this smartphone is worth it. And given that the original EVO lacked a slide-out keyboard we’re not sure if that’s enough to convert existing EVO users. Then again, perhaps Sprint didn’t want to be the only girl at the CES dance wearing last-year’s dress and they pushed to get the EVO Shift out there.

If you’re already sold on the EVO Shift the good news is that it will be available only on Sprint starting January 9th.

HTC EVO Shift 4G follows in the footsteps of the award-winning HTC EVO™ 4G bringing customers an attractive, streamlined design with the addition of a sliding QWERTY keyboard and an astonishing list of features. Beyond the latest version of the highly acclaimed HTC Sense user experience, HTC EVO Shift also boasts the power of 4G, Android™ 2.2, a 5MP camera/720p HD camcorder and a 3.6-inch capacitive touchscreen display with pinch-to-zoom capability. HTC EVO Shift’s custom Web browser is optimized for convenient mobile use with functions like pinch-to-zoom and automatically reflowing text, while Sprint 4G speeds deliver a full, no-compromise Internet experience. Adobe Flash technology ensures that rich Internet content, such as embedded video and animation, are displayed the way they are meant to be seen. The slide out full QWERTY keyboard makes staying in touch with friends and family through messaging and social networking quick and easy. With built-in mobile hotspot functionality, HTC EVO Shift 4G also allows up to eight Wi-Fi-enabled devices, including a laptop, camera, music player, video player and any other Wi-Fi-enabled device, to enjoy the benefits of 3G/4G speeds on the go.

*Time may vary depending on 3G/4G coverage and usage.