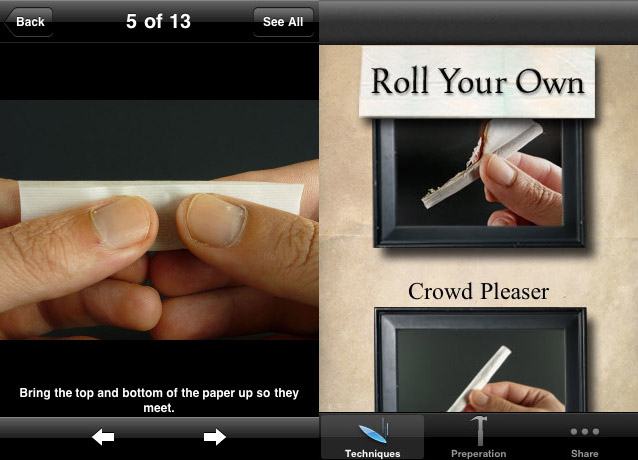 You’re just hanging out at a house party, minding your own business, when your grungy friends pass you a baggy and some zigzags as they sit down to a game of Rock Band. Fifteen minutes of cursing and crumpled papers later, you hold up what appears to be a tiny, pale, under-inflated paper football, half-transparent from your attempts to lick it closed. And all your friends laugh at your inferior excuse of a doobie.

“I’ll show them,” you think to yourself, and go to light it anyways. But all you get is a mouthful of air through the gaping hole where that strip of stamp-glue didn’t stick, and the front half of the loosely-wrapped paper goes up in a burst of flames, spilling greens all over your lap.

If you’re familiar with this scenario, you’ll be pleased to hear about the new “Roll Your Own” app for the iPhone. Using detailed, step-by-step videos and photos – complete with narration – the app teaches the art of joint-rolling to ungifted spliffsmiths. But RYO doesn’t stop at just one. No, this app will teach you five different styles. Perfect for those who need a new parlour trick.

It even boasts photos of a foggy teenage governator on its promotional site – which, I’m guessing, would have been of Jobs himself if the “executive team” at Steah had it their way.

Scared you might have to blow all your ganja money to get the app? No worries., you get two instructional step-by-step videos free, with the option to unlock three more for 99 cents. How did this get past the Apple app store scrutiny you ask? The videos use tobacco.

[Roll Your Own via iTunes]