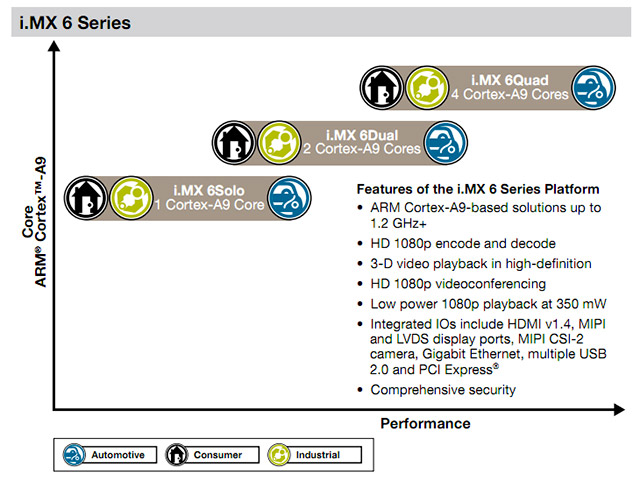 In the on-going quest to do more with less, Freescale Semiconductor continues to deliver what we need to power our mobiles, tablets, and other infotainment appliances. The Austin-based manufacturers have announced the launch of their i.MX 6 series of quad-, dual- and single-core applications processors for 2011.

With up to four ARM Cortex A9 cores chugging at 1.2GHz each, they’re packing more than five times the power of their current generation of processors. And hitting the right notes on power consumption, Freescale reports the i.MX 6 series can deliver 24 hours of HD video playback and 30-plus days of device standby time.

Freescale is strategically targeting the fastest growing segments of the consumer market with this launch as they pair their super-powered processors with eReaders, tablets, smartphones and the increasingly common automotive infotainment systems.

Last but not least, the line interconnects with MDNI 1.4, GbEthernet and USB 2.0 but for some reason no USB 3.0. That said, with an open-ended “later this year” time frame there’s always room for future improvements in this and coming generations.

Compatible i.MX 6 series scales from one to four cores and raises the bar with a new portfolio of high-performance, low-power multicore processors

“The i.MX 6 family provides OEMs with a power-efficient, scalable, and software-compatible solution that meets the demands of a wide range of consumer and embedded applications.”
Integrating one, two or four ARM® Cortex™-A9 cores running at up to 1.2 GHz each, the i.MX 6 series delivers up to five times the performance of Freescale’s current generation of applications processors. This performance provides additional headroom for unbounded user experiences in next-generation tablets, eReaders, smartphones, automotive infotainment systems and other exciting consumer and automotive products.

The i.MX 6 series targets several of the fastest-growing application spaces in the consumer market. According to industry analyst firm In-Stat, standalone eReader shipments will grow from 11.5 million units by the end of 2010 to 35 million in 2014, while the firm’s forecast for mobile Internet tablets projects shipments to reach approximately 58 million in 2014, up from 13.7 million in 2010.

“With the i.MX 6 series, Freescale offers the broadest and highest performance family of products based on ARM® Cortex™-A9 technology of any vendor in the mobile processor segment,” said Jim McGregor, chief technology strategist at In-Stat. “The i.MX 6 family provides OEMs with a power-efficient, scalable, and software-compatible solution that meets the demands of a wide range of consumer and embedded applications.”

Continuing to build on its advanced low-power design expertise, Freescale’s i.MX 6 series features industry-leading power consumption for demanding applications such as HD 1080p video playback. The i.MX 6 series can deliver up to 24 hours of HD video playback and 30-plus days of device standby time. Integrated power management capabilities reduce the need for external PMICs and help to ensure only those components required for a task are powered.

The i.MX 6 series is distinguished further by being one of the first applications processors to offer hardware support for the VP8 codec. “By incorporating VP8 compression technology into its advanced new i.MX 6 series of applications processors, Freescale is setting the pace for the consumer industry,” said Jani Huoponen, hardware product manager for the WebM Project. “This hardware-based VP8 implementation gives Freescale customers the benefits of fully accelerated WebM support and outstanding performance.”

The product series is comprised of the single-core i.MX 6Solo, dual-core i.MX 6Dual and quad-core i.MX 6Quad processors. Key technical features of the series include:

Freescale Semiconductor is a global leader in the design and manufacture of embedded semiconductors for the automotive, consumer, industrial and networking markets. The privately held company is based in Austin, Texas, and has design, research and development, manufacturing or sales operations around the world. www.freescale.com.