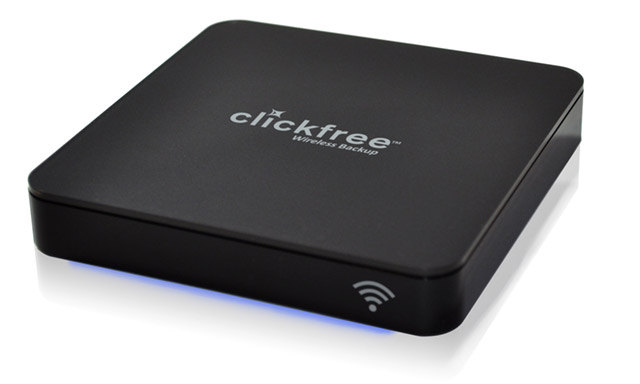 Clickfree, the innovators on the cutting edge of backup technology, have made backing-up multiple computers even easier for both home and office users. Leveraging your wireless network connection, Clickfree allows users to backup as many Window and Mac computers as necessary with their new Clickfree Wireless product.

Being showcased at this year’s CES, the new Clickfree Wireless has totally eliminated the need to download, install and configure software as part of the backup solution. Basically new users just need to plug in the Clickfree device once into each computer on their network for the initial backup and the whole process is pre-configured. The device can then be placed anywhere in the home or office with a wireless signal and it will do the rest, automatically backing-up the desired computers.

Added bonuses for the networking-deficient are that you don’t need to know anything about your wireless network and you can restore files wirelessly. Plus the mere fact that the backup automatically completes to the external hard drive is enough to make the product worth its weight in gold.

If you’re down at CES check out the product live at the Las Vegas Convention Center, South Hall, booth #36512 or see the demo on their website (http://www.clickfree.com/products_c3.php).

Retailing at $179.99 for the 500GB and $249.99 for the 1TB version we think the product is a steal for almost everyone. We’re told larger capacities should be out in Q1 2011 though so it may be worth the wait if you’re in the market for a backup solution.

Clickfree Wireless automatically performs all scheduled backups wirelessly from anywhere in a home or office, on multiple computers, PCs and Macs

2011 International CES
January 04, 2011 08:03 AM Eastern Time
LAS VEGAS–(EON: Enhanced Online News)–Clickfree, the inventors of effortless automatic backup, today announced the launch of Clickfree Wireless in the U.S., giving customers the simplicity of Clickfree’s totally automated backup solution with the benefit of a wireless connection. Clickfree Wireless will backup as many computers as the customers needs, both Windows and Mac, making it the ideal solution for both home and office.

“Clickfree has made setting up a wireless backup device as easy as just plugging it in to your computer”
Clickfree Wireless will be on display for the first time in the U.S. at the 2011 International Consumer Electronics Show, which runs Jan. 6-9. Clickfree can be found in the Las Vegas Convention Center, South Hall, booth #36512.

Setting the standard and defining the term, ‘effortless backup,’ Clickfree has completely eliminated the need to download, install and configure software. Consumers don’t have to know anything about their home’s wireless setup or network configuration. By simply plugging the Clickfree Wireless device into each computer and performing an initial backup, all settings will be found and configured, and backups will be done automatically using 802.11n wireless technology. The device can be placed anywhere in the home, and does not need to be plugged in to any of the computers for it to continue backing up and safeguarding customers’ digital data.

Irreplaceable photos, music, videos and other documents on the home or office network will be protected and are incredibly easy to retrieve as well. In addition, customers can search and restore lost files, photos and other digital content over the wireless connection.

“Clickfree has made setting up a wireless backup device as easy as just plugging it in to your computer,” said Bryan McLeod, CEO of Storage Appliance Corp. “With our proprietary Backuplink™ technology which makes the once complex task of backing up digital content on a network totally effortless, we have ensured everyone can use our Wireless Backup device.”

Clickfree Wireless Backup is available now online from Clickfree.com. The MSRP for a 500GB is $179 and 1TB is $249. Larger capacities will be available in Q1 2011.

Storage Appliance Corporation, operating under the Clickfree™ brand, makes technology easy for consumers. As the inventors of effortless consumer backup, the Clickfree™ software makes backing up a PC or Mac as easy as plugging it in to the USB port — no software to install or configure. Clickfree is dedicated to offering consumers the Ultimate Backup Experience. Clickfree brings together features that have never before been available in a single backup product including flawless restore. Recognized as the market leader in consumer backup, Clickfree has received numerous awards from CNET™, PCMag™ and Laptop™ magazine. Clickfree’s software is not just easier – it’s smarter. With 23 patents pending, this exclusive technology is only available to Clickfree™ customers. Visit www.Clickfree.com for additional information.