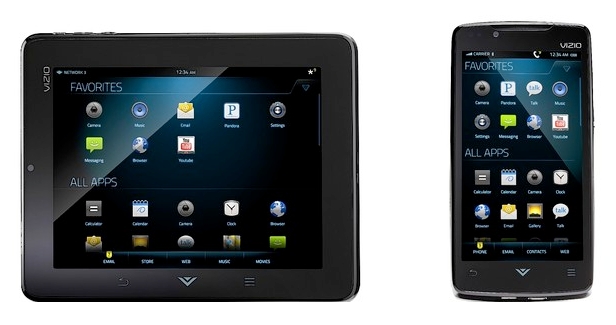 Vizio has officially announced they will reveal their VIA Smartphone and VIA Tablet at CES this week. The Smartphone has a 4-inch “high-resolution” capacitive touch screen, front and rear-facing cameras (VGA and 5 megapixels respectively) with the ability to capture HD video. Other features come by way of Wi-FI b/g/n, GPS, Bluetooth, Micro-SD and an HDMI-out port. The VIA tablet has an 8-inch touchscreen with similar connectivity and expansion options. Both devices have a 1GHz processor and built-in IR blaster which will allow them to work with Vizio’s Google TV. An unannounced version of Android will run both devices. More to come from the CES show floor beginning January 6th to the 9th.

– Part of the VIA Plus Ecosystem, the VIZIO smartphone and tablet Feature a Unified and Intuitive User Experience to Simplify Today’s Connected Lifestyle

– The VIZIO smartphone features a 4″ high-resolution capacitive touch screen with 5 Megapixel camera for photos and HD video capture, and a front-facing camera for video chat

Irvine, CA-January 3, 2011 – VIZIO, America’s #1 LCD HDTV Company*, announced today it is expanding into the mobility category with the VIZIO smartphone and tablet (referred to as the “VIA Phone” and “VIA Tablet” below) — both part of the VIA Plus ecosystem, the next generation of VIZIO Internet Apps™, that features a unified, sophisticated and intuitive user experience across multiple CE devices including VIZIO HDTVs, Blu-ray players, smartphones and tablets.

“Both the VIA phone and tablet feature the highest performance coupled with innovative features that tie them into the media consumption experience,” said Matthew McRae, Chief Technology Officer at VIZIO. “And by integrating the VIA Plus user experience also found on our next generation TVs and Blu-ray devices, VIZIO is delivering the multi-screen, unified ecosystem others have talked about for years and never delivered.”

The VIZIO VIA Tablet also features a 1 GHz processor, with an 8″ high-resolution capacitive touch screen, 802.11n Wi-Fi and Bluetooth connectivity, GPS, a MicroSD card slot for additional memory expansion, HDMI output with HD video playback, and a front-facing camera for video chats. It also boasts a unique three-speaker design for stereo audio in both portrait and landscape modes.

Both devices include a built-in IR blaster with universal remote control app for quick access to the entire home theater or nearly any other CE device in the home. Both run on the Android™ Platform, which will also allow users to access thousands of apps through Android Market™.

“As part of the VIA Plus ecosystem, the VIA phone and tablet are natural extensions of the HD entertainment experience that historically has centered around the TV,” added Mr. McRae. “Whether consumers are looking to enjoy content on the big screen, on their tablet or on a mobile phone, VIA Plus delivers on the promise of Entertainment Freedom for All by creating a rich and consistent user experience across all devices that’s accessible to everyone, from the power user to the casual browser.”

VIZIO will be demonstrating the VIA Phone and VIA Tablet in their private CES showcase at the Wynn Hotel from January 6 to 9, 2011.