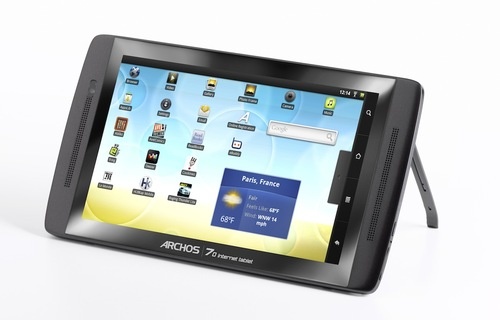 The tablet market has really started to heat up this year, but Archos has been doing this kind of thing for years already. Trying to remind you of its pedigree while still offering something new and exciting is the Archos 70 Internet tablet. For starters, it runs on Google Android.

This is not the first time that Archos has dabbled in Android and it certainly will not be its last either. While other tablets are typically being limited to, maybe, 64GB or so of storage, the Archos 70 goes much bigger with its 250GB hard drive. Event hough it has that much more storage, the tablet is able to stay quite thin (0.55-inches) and light (14 ounces).

Just as the Archos MP3 players did little to take a bite out of the iPod’s market share, I don’t really expect this line of Android tablets from Archos to make much of a dent in Apple’s coffers. That said, those looking for an Android alternative might want to give Archos a ring. The Archos 70 Internet tablet is on sale now for $350.