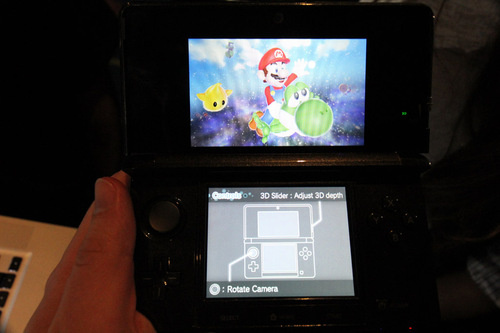 What do you do when you have a product that is clearly targeting a younger audience, only to discover that it may not exactly be appropriate younger audience? That’s exactly the pickle that Nintendo has somehow found itself handling with the Nintendo 3DS. You see, the 3D-ness could have seriously detrimental effects on the eyeballs of young children.

Nintendo has issued a warning, saying that the 3D mode on the Nintendo 3DS shouldn’t be used by children under the age of six, because their vision is still in development. The way the stereoscopic 3D works on the device “has a potential impact on the growth of children’s eyes.” They might not go blind, but they might not develop properly either.

I think everyone’s parents told us not to sit too close to the TV while playing video games as a kid and, well, it seems that they might have been right. Staring at the stereoscopic 3D on the 3DS could fry their little brains and melt their little eyeballs… so to speak. That’s why Nintendo is also implementing a parental control on the 3DS that will lock the device in 2D mode.

Oh, and don’t think Nintendo is alone on this front. You know how the PS3 does 3D gaming too (albeit with glasses and all that)? Well, Sony has also issued a warning saying that kids under six shouldn’t play their 3D games either, unless they’ve been examined by an optometrist and given the go-ahead. So, 3D gaming might be the wave of the future, but the future could have a bunch of blind kids too. Great.