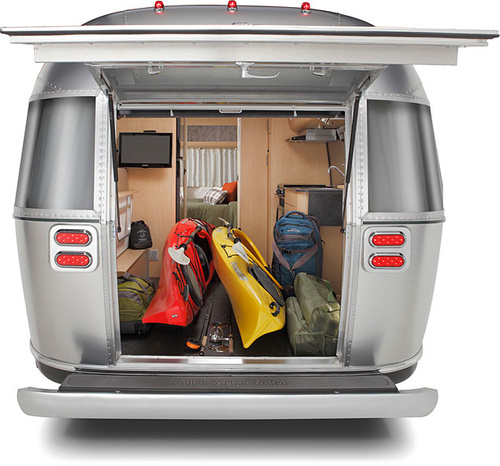 This pristine tin can is packed with all of the size and amenities of a high-end bachelor pad, and will cost you about the same at $74,000. It includes everything you would expect for an adventure in the great outdoors: A flat-screen TV, queen bed with goose-down duvet, fold-away lounge; heat. Electricity. You can grab a cold beer from the fridge, throw on some tunes, open the hatch door at the hind-end and sit on the rubber-topped, bench-style back bumper. It’s like giving mother nature a big bear-hug.

“Airstream customers have always been passionate in their pursuit of outdoor adventure, and now we’ve created the ultimate tool to support their needs,” says Airstream President and CEO Bob Wheeler. “And we’ve done so by perfectly melding the inimitable style of two great American brands.”

“Eddie Bauer has been outfitting fishermen, hunters, mountaineers and other outdoor adventurers for 90 years,” said Neil Fiske, president and CEO of Eddie Bauer. “Partnering with Airstream gives us the opportunity to build something special for those who enjoy comfort and style yet want the flexibility to take all of their gear and equipment on their family adventures.”

Sounds like the CEOs of these companies have blown past their adventure years and straight into the perspective that camping and luxury belong in the same sentence.

I don’t think I would ever consider camping in something like this. But it’s a tempting thought when considering my next apartment. It’s mobile. It’s bigger and classier than every flat I’ve ever had the pleasure of inhabiting. And I could pay it off in six years for less than the cost of inner-city rent.