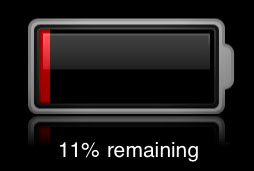 The BlackBerry PlayBook is late to the tablet party, having been beaten to the punch by Apple’s iPad and then subsequently missing the holiday shopping season. That may or may not be an issue for the “corporate tablet” deceivingly named with a fun word; but it looks like RIM is enroute to missing another opportunity. And the PlayBook has apparently been hit with another delay.

We originally heard that RIM was trying to get the PlayBook ready in time for Santa to make his rounds, but that a Q1 2011 release was considerably more likely. This was later “confirmed” by Jim Balsillie that the PlayBook would go on sale in the first quarter with a sub-$500 price tag. However, it seems that some battery concerns could push the date a little deeper into 2011, according to Shaw Wu of Kaufman Brothers.

Apparently, RIM is trying to “improve its relatively poor battery life of a few hours compared to the 6 hours for the Samsung Galaxy Tab and 10 hours for iPad.” Enterprise users certainly need some extra juice on the go, and low battery life is going to be a big no-no in this market. As such, Wu is saying that RIM won’t be ready with a commercially-viable PlayBook until May 2011.

By then, the market will have already been flooded with a series of Android tablets, not to mention the distinct possibility of an iPad 2 around the same time. RIM already missed some opportunities and if a May launch is indeed for real, they could be really late to the party. They’d need a PlayBook 2 by the time PlayBook (1) is ready.