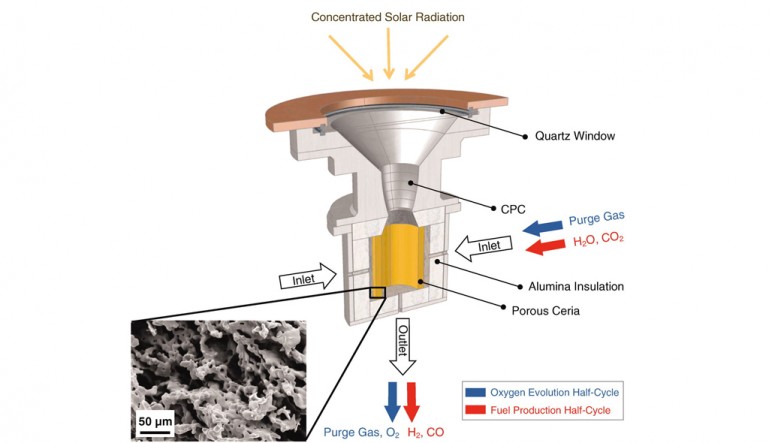 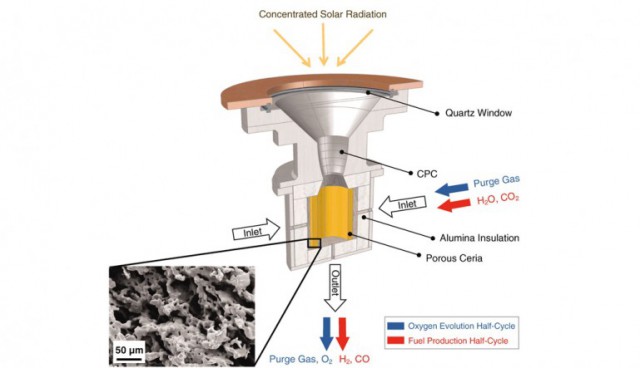 Ready for another green energy alternative? You may already be familiar with solar panels and may have just equipped your home with geothermal heating, but what can you do to convert the sun’s rays into energy that is easily stored and transported?

Researchers from the United States and Switzerland have reportedly put together a prototype generator that offers an entirely different way to capture the sun’s energy compared to a conventional photovoltaic (solar) panels. The prototype has a quartz window and a cavity for focusing sunlight into a cylinder lined with cerium oxide (ceria).

When the sun’s rays heat up the ceria, it will thermochemically break down the water and carbon dioxide that is being pumped into the cylinder. The net result is carbon monoxide and hydrogen, which can then be converted into liquid fuel. This hydrogen feul can then be used with hydrogen fuel cells. Alternatively, the hydrogen-carbon monoxide mixture could be converted into syngas, a combustible gas.

“The chemistry of the material is really well suited to this process,” says Professor Sossina Haile of the California Institute of Technology (Caltech). “This is the first demonstration of doing the full shebang, running it under (light) photons in a reactor.”

Now, I’m no scientist, but there are at least two big concerns about such a generator. First, it needs energy to pump in the source materials (water and carbon dioxide). Second, it still outputs carbon monoxide, which to my knowledge, isn’t really a good thing unless you have some sort of greenhouse. At this stage of the game their prototype is very inefficient; fuel created harnesses only 0.7% to 0.8% of the solar energy taken into the vessel. The good news is that ceria is really abundant, so getting that stuff wouldn’t be too difficult.