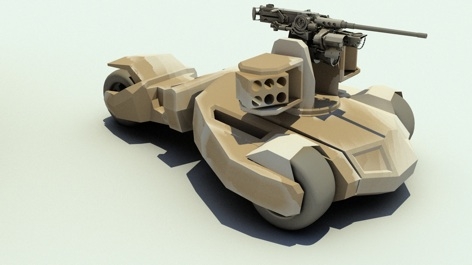 I like to think a lot of people in the defense and security industries took much of their inspiration from comic book heroes when they were kids; the noble idea of defending the innocent against attacks from villains. And that seems to be the case with BAE Systems’ new battle-bot concept.

The defence and security company which develops and supplies weapons systems to countries such as the United States and Saudi Arabia, have taken one from the Dark Knight. And it doesn’t even seem like they put much effort into disguising the fact.

Hisham Awad of BAE Systems even stated “in all seriousness, we decided that we didn’t have a monopoly on inspiration, and if we saw something in a film that we thought might be a good idea, why not take a look at it and see if there’s something practical we can develop?”

The “Raider” is only one of seven new concepts recently released by the company, and though none have hit the prototype stage yet, the focus seems to be on creating unmanned vehicles that will allow for less troops on the front lines.