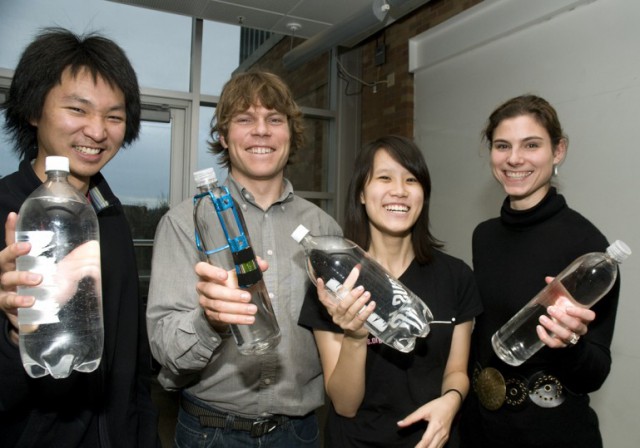 Four students from the University of Washington may be closer than ever to solving the world’s clean water shortage after designing a gizmo to aid in the solar purification of water.

Using a method called SODIS, or the SOlar DISinfection of water in clear plastic bottles, UV rays from the sun can kill 99.9 per cent of bacteria and viruses in water – about the same amount as chlorine. But it’s an iffy process solely for the fact that there’s no way to tell when the water is safe for human consumption.

But U of W students Chin Jung Cheng, Charlie Matlack, Penny Huang and Jacqueline Linnes claim to have taken the same parts as are used in cheap solar calculators and reprogrammed them to monitor how much light is passing through the water in the bottle. Once the water is clear enough and safe to drink, they say, the device’s light stops blinking.

Fundación SODIS, a Bolivia-based nonprofit group that promotes the SODIS method in Latin America, now a holds non-exclusive licence to use and develop the technology. But Matlack, Linnes and another student have started a company called PotaVida, where they’ll be developing and promoting the water bottle indicator themselves.

We all know PET bottles leach plasticizers into water when they are left in the sun. As crazy as this sounds, SODIS bottles are excluded from these findings.  According to a recent engineering certificate from the Department of Civil Engineering, India [pdf], these bottles are below the WHO standards for safety.

Each unit should cost about $3.40, but expects that price to drop once the supplies are bought in bulk. And, having lived in Bolivia-neighbouring Perú myself, I have to say that’s a lot cheaper than my tried-and-true method of keeping nicotine and alcohol levels in your bloodstream consistently high enough that the wee critters in the tap water can’t survive your lifestyle.