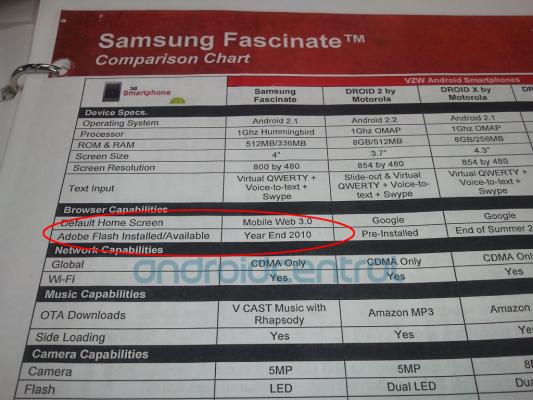 There aren’t too many days left in 2010, but Verizon subscribers may be getting a tasty little treat before they see Snooki drop in a ball in Times Square. If you happen to have a Samsung Fascinate, you could be getting the Android 2.2 Froyo update in the next few days.

No, this isn’t quite as good as the tasty new Android 2.3 Gingerbread that comes pre-loaded on the new Google Nexus S, but at least it’s a step up from what you have now. Verizon’s take on the Samsung Galaxy S platform has come catching up to do with its stablemates, after all. The “Droid” line from Verizon is already doing the Froyo thing.

If these reports hold true, it means that the Samsung Fascinate will have Froyo in the next few days, which still beats the LG Ally to the punch. That one’s not getting Android 2.2 Froyo until Q1 of next year.

And here’s the part where we dash your happiness, if just a little. There’s word that the Epic 4G, which is Sprint’s version of the Galaxy S, is going to get 2.3 Gingerbread before we all sing Auld Lang Syne. Aw, poor Fascinate owners.