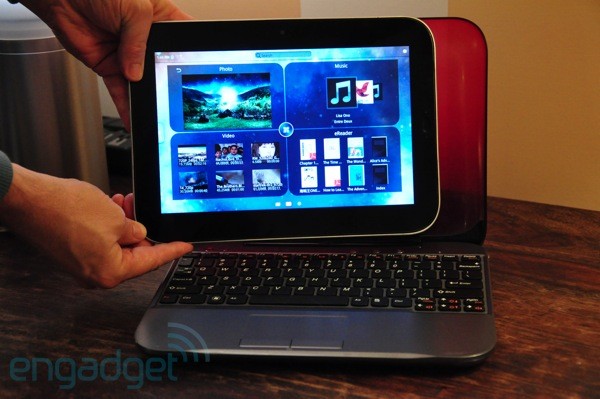 It has been almost one whole year since we last heard of the Lenovo U1 and it’s only now that a real “hands-on” is being provided? Yes, I was able to fondle the alpha-level device at CES 2010, but it wasn’t exactly market ready.

Well, it turns out that Lenovo has not yet abandoned this contraption just yet and some real “first impressions” are being posted on the Internet. For starters, the standalone tablet portion is being dubbed LePad and the docking part is being called the U1 dock. Combined, you get the Lenovo U1 Hybrid.

The interesting thing is that a lot has changed since we saw this product at CES last year. The “new” 10.1-inch LePad gets a capacitive display, Google Android 2.2 (instead of the Linux-based Skylight), and the LePhone skin for colorful navigation. The guess is that Snapdragon has also been ditched in favor of NVIDIA Tegra 2, possibly as a pre-maneuver for Honeycomb support, but we can’t say for sure. And yes, it has dual cameras.

As far as the Lenovo U1 Hybrid dock is concerned, it seems to function in much the same way as we saw before, offering a full chiclet keyboard, a beefed up processor, and Windows 7. The unit available for the “hands on” was non-functional, though.