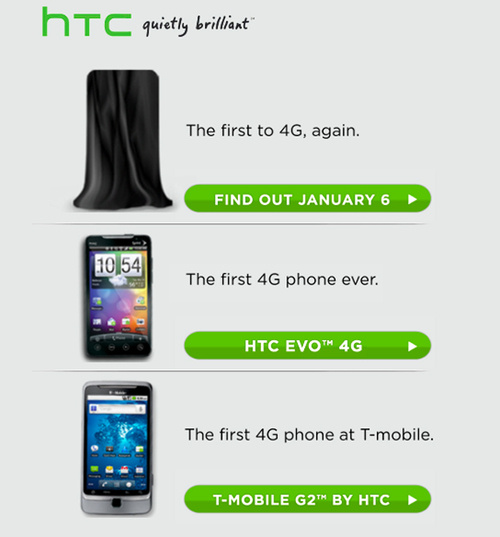 I think the image provided here is pretty clear. There’s not too much ambiguity about it unless they really want to throw us into a loop. If this image is to be believe, the kind folks at HTC will be formally unveiling the HTC Incredible HD on January 6 and the smartphone will play happy with the newfangled Verizon LTE 4G network.

Yes, we’ve all heard the arguments about what really is and isn’t 4G, but as far as marketing speak goes, HTC really has been the first to market with quite a few of these devices. The HTC EVO 4G was the first WiMAX phone in America. The T-Mobile G2 (HTC Desire Z) was the first 4G phone to show up with T-Mobile. If this holds up, the HTC will be the first with 4G on Big Red too.

That’s the good news. Or at least, that what the good rumors are leading us to believe. We have to realize that the HTC material first leaked out on a domain that we don’t know and it was “reported” on the AndroidCentral forum by some random user. Not exactly solid evidence, but it sure sounds reasonable.

Even if the good word holds true, I imagine that January 6 is only the official unveiling and/or announcement on the part of HTC and not exactly widespread availability. After all, January 6 is the first day of CES. Don’t they have a press conference that day?