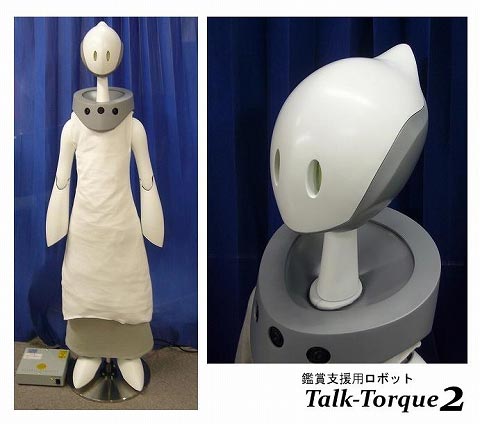 That really is a misnomer, don’t you think? When you name a robot the “TalkTorque 2” and make the conscious decision for the creation never to utter a single word. Whatever the case, that’s what the guys at Tsukuba University in Japan did with this particular robot overlord.

The idea behind the Talk-Torque 2, which is almost more alien-like than robot-like, is that it can guide you through a museum using only gestures. The robot is supposed to “become a master at human communication without words,” directing your attention toward points of interest as it acts as a tour guide through a museum, art gallery, or some other similar exhibit.

I’m not completely convinced that this kind of robot is all that useful. You might be better off going with the old school “audio tour” contraptions that they give out at museums, but I can see how something like the Talk-Torque 2 robot would probably be cheaper to operate in the long run than having to pay a (human) staffer to guide visitors through the exhibits.

If you’re curious about how the Talk-Torque 2 does its thing, the roaming robot is equipped with three cameras and a laser rangefinder. It also has almost human-like arms, hands, and hips to gesture you toward things you want to see.