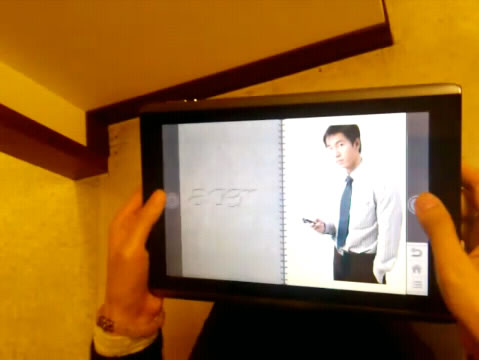 The Apple iPad may be the current reigning king in the world of tablets, and will likely hold on to that throne for some time to come. Even so, we will soon be treated to a lot more alternatives, one of which is the Android tablet coming by way of Acer. A number of videos have surfaced on YouTube showing off what this thing can do.

For starters, while the 10-inch tablet is definitely running Google’s preferred mobile operating system, Acer has outfitted the device with a series of custom apps of its own. Everything is still very much in beta stage, but it does start to demonstrate how Acer plans on using the built-in gyroscope. For instance, pages in the photo album can be “flipped” by tilting the tablet (in addition to the usual finger swipe).

The Acer tablet will be updated to ship with Android Honeycomb too; these early videos may not necessarily be indicative of what Acer will ultimately offer in a final retail product. I really hope that the tilting photo album and e-reader work better than in the demo because it still looks pretty buggy.

Hopefully, Acer will have a few demo units on hand at the Consumer Electronics Show next month. Many of its Taiwanese neighbors will probably be there with their own tablets too.