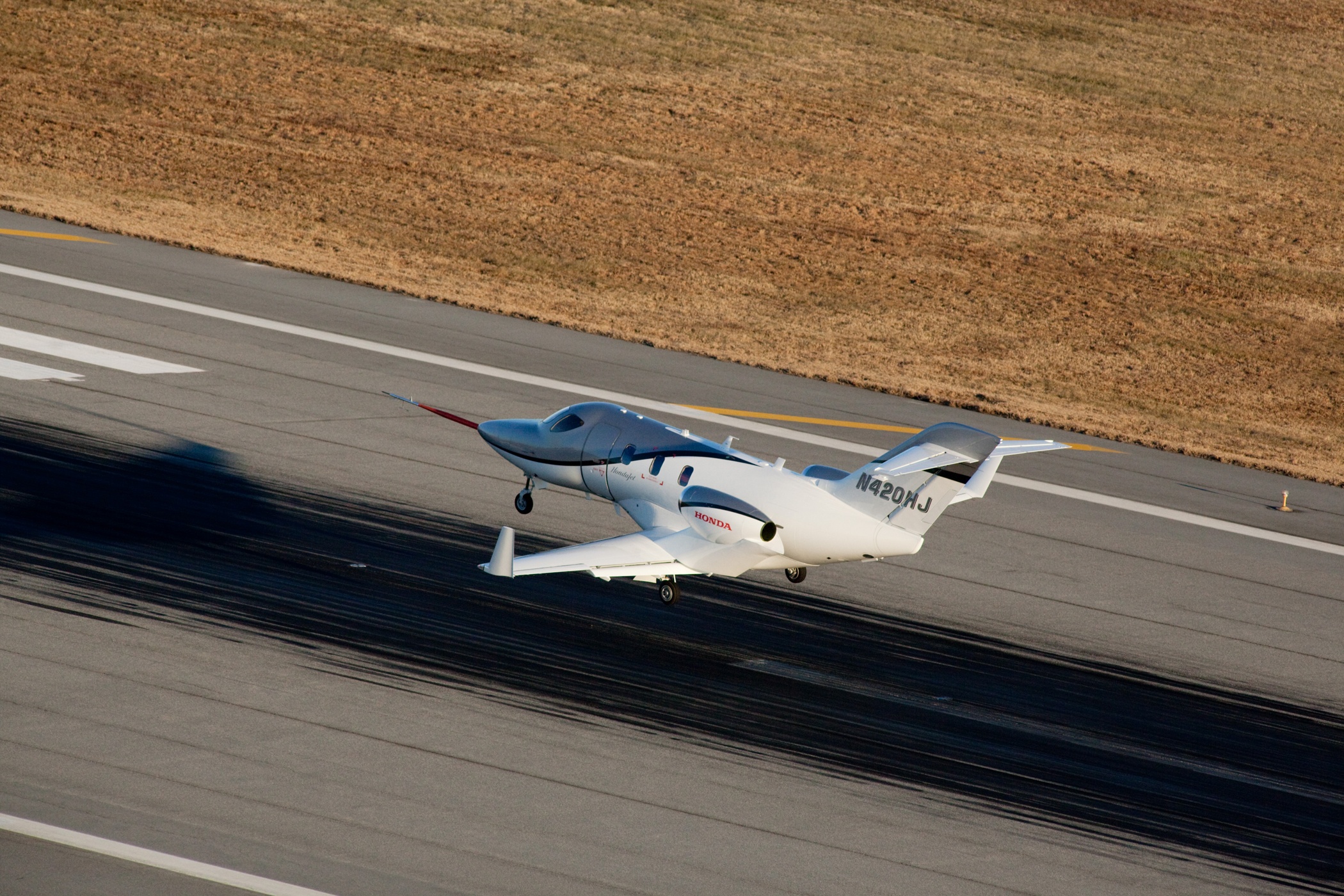 The FAA-conforming HondaJet just successfully completed its maiden voyage over the skies of Greensboro, North Carolina, the site of Honda Aircraft Company’s world headquarters. The bird was in the air for just under an hour and it seems that everything is peachy keen on the FAA conformity front. This places the plane that much closer to commercial viability by 2012, just as Honda had planned.

The jet has an interesting design, similar to that of a hummingbird, Honda must have been playing in the wind tunnel for some time. It’s a shame there’s no hybridization for the HondaJet, reading the press release below it appears to be a typical fuel burning sky flyer. It can up to as far as1400 nm (1611 mi/ 2593 km) and carry 2 crew + 6 passenger with 57 cubic feet of cargo.

Honda Aircraft Company, Inc., today announced that it has successfully completed the first flight of its FAA-conforming HondaJet advanced light business jet. The event is a significant step in Honda’s aerospace program leading to delivery of aircraft in 2012.

The first conforming HondaJet lifted off yesterday, December 20, 2010, at 15:31 EST from Honda Aircraft Company’s world headquarters facility at the Piedmont Triad International Airport in Greensboro, North Carolina. The HondaJet remained aloft for 51 minutes, during which time the aircraft’s flight characteristics and performance were analyzed and systems checks were conducted. Various test data gathered during the flight were transmitted real-time to Honda’s flight test telemetry operations base within the company’s world headquarters facility.

“This is a very important milestone for the HondaJet program,” said Michimasa Fujino, Honda Aircraft Company President and CEO. “This aircraft was assembled and tested under strict FAA certification processes, and we are very pleased to have achieved this successful first flight. Our team has worked extremely hard to reach this critical step in the HondaJet program, and these results reflect Honda’s focus and determination to develop a class-leading aircraft.”

“We are very encouraged by our initial review of the flight data, which indicates the conforming HondaJet performed as expected. As we move forward, we will continue to focus all of our efforts and energy to deliver to our customers the most advanced light business jet yet created,” said Fujino.

About HondaJet
Honda Aircraft Company, Inc., a wholly owned subsidiary of Honda Motor Company, Ltd., has amassed orders for well over 100 HondaJet advanced light business jets. Scheduled for first delivery in the third quarter of 2012, the $4.5 million HondaJet is Honda’s first-ever commercial aircraft and lives up to the company’s reputation for dynamic performance together with superior efficiency. The HondaJet proof-of-concept aircraft has accumulated more than 500 flight test hours and attained both a top speed of 420 knots (483 mph) and a maximum altitude of 43,000 ft. in flight testing.