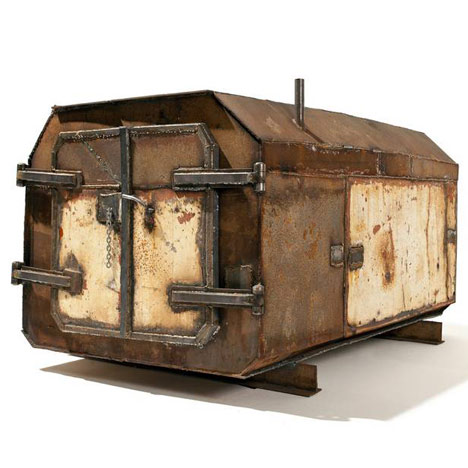 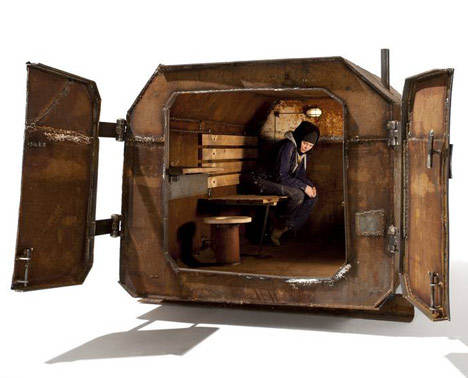 “In this nightmare, total functionality meets total futility,” Joep van Lieshout has been quoted when referring to this project.

Atelier van Lieshout (literally “workshop of Lieshout”), the same highly disturbed Dutchmen who gave the world SlaveCity, the Wombhouse, and mounted a 57mm Canon on the company car, have finished their newest project: The Vostok Cabin.

Apparently designed and built for the paranoid, eco-conscious, minimalist, post-apocalyptical-architecture admirer, the indestructible mobile home is constructed of reclaimed parts from scarred, rusty, demolished ships, welded together in an ad-hoc manner. Inside the heavy, fortified doors, the interior follows van Lieshout’s usual style: No more space than the human body absolutely needs – complete with a make-shift loo to tack onto their long list of custom toilets.

The only features aside from the toilet are two park-style wooden benches and a stove.

“The material due to its previous life is crooked, damaged and irregular,” says van Lieshout. “There is no straight edge to be constructed from these disastrous supplies. The Cabin looks like an improvised defense/attack apparatus made by a local blacksmith in order to have a better chance of survival in times of revolution and civil war.

“The changing climate, growing poverty, wars and more are only expanding,” he continues. “This movable nomadic dwelling unit provides shelter from this disconcerting situation…It is virtually indestructible.”