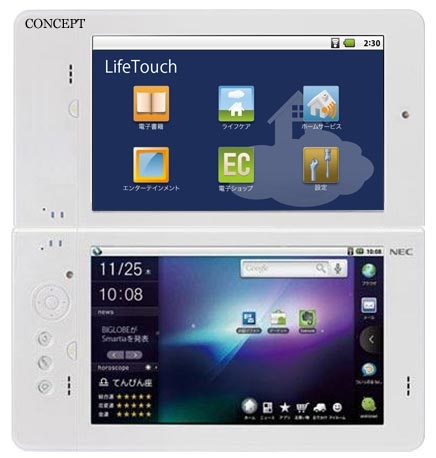 NEC has already indicated that it will be at the Consumer Electronics Show in Las Vegas next month and will definitely have its Cloud Communicator tablet on the show floor in full force. However, it seems that the a dual screen version of the Android tablet will also be making an appearance.

I imagine that much of the “guts” of the dual-screen tablet will be the same as its single screen counterpart, meaning that we should expect an ARM Cortex A8 processor, 3MP camera, SD card slot, WiFi, GPS, and Android 2.1. The main difference, of course, is the inclusion of a second 7-inch “Retina Touch Panel” display.

The idea of rocking two touchscreens on a single tablet isn’t exactly new, but many of the concepts and prototypes we’ve seen thus far have left something to be desired. I’m not entirely sure what NEC is going to do to make its doubled-up Cloud Communicator any better, but if the rumors hold true, I should be able to find out in just a couple of weeks.

The First Dual-LCD-Screen Android Tablet, LifeTouch and a New Android Application Marketplace Available to Demo in the South Hall 4, Booth 36268

Tokyo, December 21, 2010 – NEC Corporation (NEC; TSE: 6701) announced today that it will participate at Pepcom Digital Experience and CES 2011 on Jan. 5-9, 2011 in Las Vegas. NEC will be debuting a new line of products and service offerings based on the Android platform, including the first showing of its dual-screen Android tablet, the introduction of its Home Gateway Solution designed for cloud access from home and its Android application marketplace, andronavi. NEC will also exhibit its single-screen tablet, initially announced in November 2010, for the first time in the U.S.

All of the products named in this release will be exhibited at both Pepcom Digital Experience on Jan. 5 and CES 2011 from Jan. 6-9 in Las Vegas.