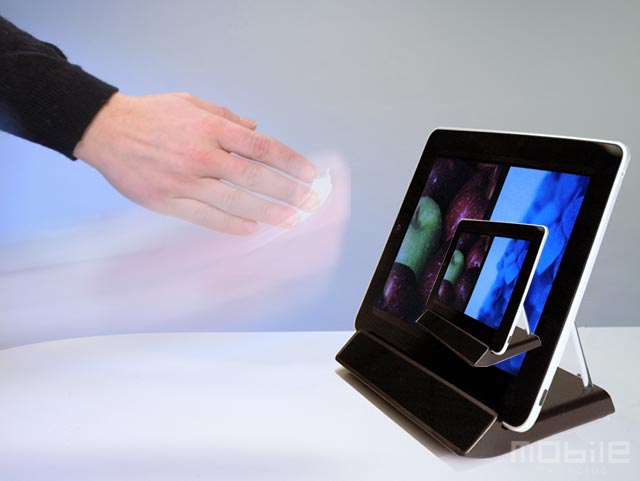 This past September at the IFA Berlin trade show Elliptic Labs revealed their Touchless Gesture User Interface technology (video). It allowed a user to make hand movements (gestures), similar to Microsoft’s Kinect technology; giving the user the ability to control their device by simple hand movements. The company had been working on a prototype with a reference design tablet which has now evolved into a touchless dock prototype for the Apple iPad.

The technology used in the dock is ultrasound, it creates a “touchless zone” that covers approximately one foot in front and to the side of the iPads screen. We had a chance to catch up with CEO Stian Aldrin, who explained the following; “The idea is that you use touchless gestures to operate primary functions of a docked tablet in situations like when you have wet or greasy hands in the kitchen. In general tablets are made for being handheld. When it is docked you are often walking or standing further away, and then using a finger on the screen involves a change of modality. Rather than bending down, leaning forward or picking it up you can use larger movements a little bit further away to do things like volume up or next song without changing modality.”

This technology will be shown at CES next month.  While it does look like its designed just for the iPad, think again. The hardware and sensors are “off the shelf components” and to run the UI a simple App on the tablet will do; essentially giving the ability for any device to receive commands via touchless zone gesture user interface.