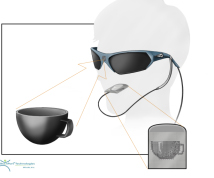 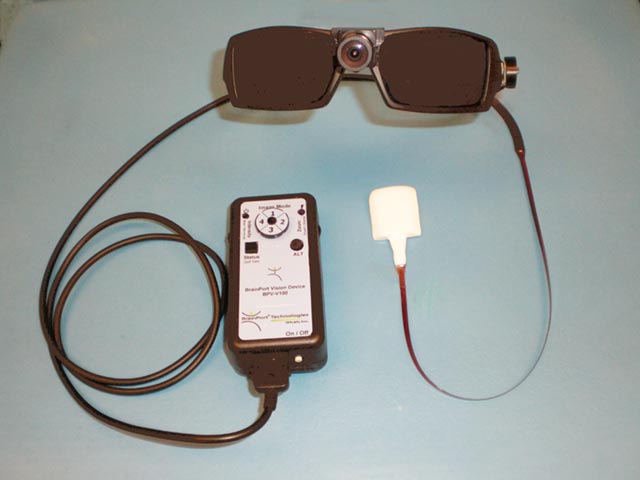 Four years ago, the University of Montreal made ABC headlines while testing the “BrainPort vision” device. In the study, a blind volunteer strapped what appeared to be a webcam mounted on safety glasses to his forehead and slipped a small electrical grid on a wide, flat orange tether into his mouth – and used his tongue to see.

Though only a crude prototype at the time, the subject was able to sense out-of-reach objects and obstacles for the first time in his life.

The system works by substituting one of the five senses (in this case, vision) for another. Using the electrical grid on the tongue and the camera on the forehead, says the group’s website, the device sends electrical impulses that feel as if somebody is “painting on the tongue with champagne bubbles.” With the high density of nerve endings on the surface of the tongue, users are able to make out shapes, movement and location.

And the strangest part of it is, brain scans of those using the BrainPort show that it actually activates the vision regions of the brain – meaning the feelings on the tongue are being translated to images by the mind’s eye.

Since that day in 2006, the BrainPort team at Wicab Inc. continue making progress and refining the gadget. The camera is smaller, now located on the bridge of a pair of shades, with the “tongue display” on a cord that loops down behind the ear and around into the mouth. The resolution of the tongue display has greatly improved, too, according to Wicab.

“Today’s prototypes have 400 to 600 points of information on a ~3cm x 3cm tongue display, presented at approximately 30 frames per second,” reads their website. “Our research suggests that the tongue is capable of resolving much higher resolution information and we are currently working to develop the optimal tongue display hardware and software.”

Though the BrainPort isn’t approved for public sale yet, testing continues – and research funding keeps pouring in. In October, the company announced it’s received $3.2 million to continue evolving and improving its visual prosthetic.