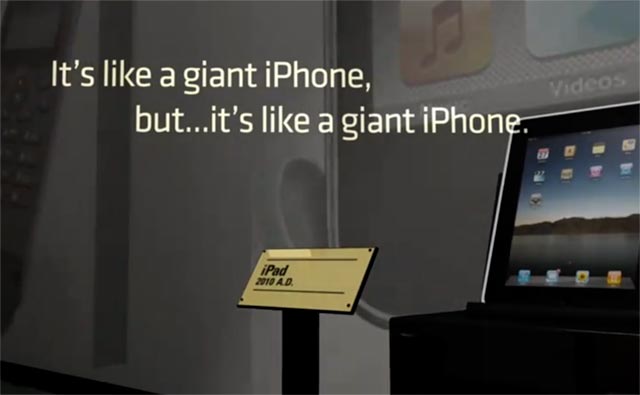 If you listen to some people, they’ll tell you that the tablet is a relatively new phenomenon. That tablets really only became relevant when Apple came forward with the iPad. Well, Motorola begs to differ, and it has come forward with qutie a clever little video of its own to show off the evolution of the tablet.

Yes, the video definitely has a “tongue” in cheek factor going on. The computer animation takes us on a virtual tour of a virtual museum, starting out with ancient Egyptian hieroglyphics. We’re told that this offered “good graphics, but weight makes for difficult portability.” Through the rest of the video, we visit other stone tablets, like the Rosetta Stone (with “multi-lingual support”). The clever caption on the Mayan engraved tablet gave me a chuckle.

Then, we show up at the iPad (which is “like a giant iPhone) and the Samsung Galaxy Tab (but “Android OS… for a phone), which leads us to the whole reason why Motorola put together this video in the first place. We see a new display at the virtual museum and it’s being set up for a new Motorola device to be unveiled at CES 2011.

Naturally, Motorola isn’t coming forward with too many details at this point, but they’re painfully hinting at Android Honeycomb (which could be Android 3.0 or Android 2.4). Towards the end of the video, we see a CGI bee and the video description on YouTube says that Motorola is “buzzing with excitement.”

I thought the video was fun and clever, but really tells us nothing. Taking a cheap shot of the iPad for being a big iPhone. If this is indeed representative of the tablet evolution, I certainly hope that Motorola brings more to the tablet than just Google’s new OS. How else is it going to separate itself from the endless supply of other Honeycomb tablets to follow?