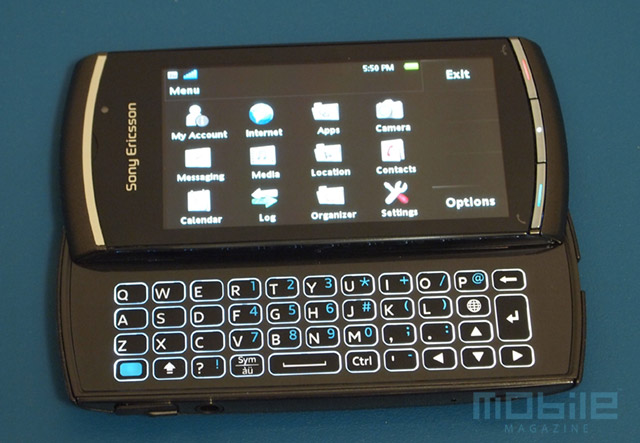 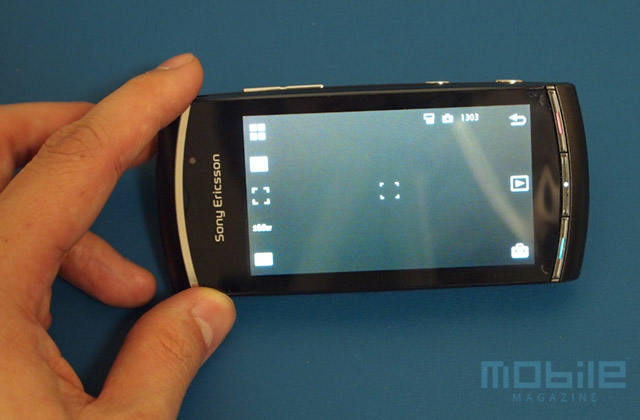 Even though a lot of people have made the transition from using regular mobile phones to using fully-featured smartphones, there still appears to be a market for those in-between devices. Some people call them feature phones, others call them quick messaging devices (QMDs), some even call them dumbphones. Whatever you want to call them, they’re still here.

The Sony Ericsson Vivaz Pro is a little different. Even though it is largely sold as a “feature phone” rather than a smartphone, it has real smartphone brains under the hood with its Symbian S60 5th edition operating system. Does this make it a really good value for people who want web connectivity and smartphone-like functionality at a “dumbphone”-like price point? You’ll soon find out.

The “Pro” part of the Vivaz Pro’s name comes by way of the hardware QWERTY keyboard that slides out the side. In essence, you get a phone that is very similar to the original Sony Ericsson Vivaz, but with a keyboard. The trade off is that the camera is downgraded to “just” a five-megapixel shooter. It retains its 720p HD video recording capability though, making this a reasonably suitable cameraphone.

Runing through the rest of the specs, we find tri-band HSDPA to go with the quad-band GSM, as well as a scratch resistant surface, handwriting recognition, 3.2-inch TFT resistive touchscreen, microSD expansion, WiFi, Bluetooth 2.1, and a 720MHz processor.

If you’re expecting the premium build quality that you would get with a device like the Nokia N8. (which is only $50 on contract with Rogers now), you’re going to be sorely disappointed with the Sony Ericsson Vivaz Pro. It feels very “plasticky” in hand, but on the plus side, it’s quite light at just 117 grams.

It’s also quite interesting that they went with such a curvature for the back cover. I guess this is supposed to give it a sleek and unique profile, but it just ends up making for a somewhat strange experience. This is exacerbated by the fact that the power button is towards the top of the back panel, partially recessed into the battery cover. From what I can tell, the keyguard can only be activated by tapping the power button, then choosing to lock the keys from the touchscreen interface. This is less than ideal.

I wouldn’t say that I’m terribly disappointed with having “just” a 3.2-inch display, but it is a shame that they went with a resistive screen on this device. Everyone is doing capacitive screens these days and going back to a resistive display felt archaic, as if I jumped into a time machine and went back to the days of Windows Mobile 5.

While there appears to be some kinetic scrolling in certain situations, this is not the case with the web browser. I’ve grown so accustomed to “flicking” my way around a webpage that it was quite jarring to see the page just stop deck on my movements. It also felt strange going back to using my fingernail rather than my finger.

Bearing in mind that this is being marketed as a feature phone and not a smartphone (even though, strictly speaking, it may be closer to the latter), I was disappointed with the performance of the web browser on the Vivaz Pro. Web pages rendered, but there would always be a couple of issues.

When I tried to visit Mobile Magazine on the phone, for example, the entire header portion came muddled with a strange effect happening on our site logo which uses a transparency. It works, I suppose, but don’t expect to get the “almost desktop” experience that you would get with iOS or Android. It’s just not there. 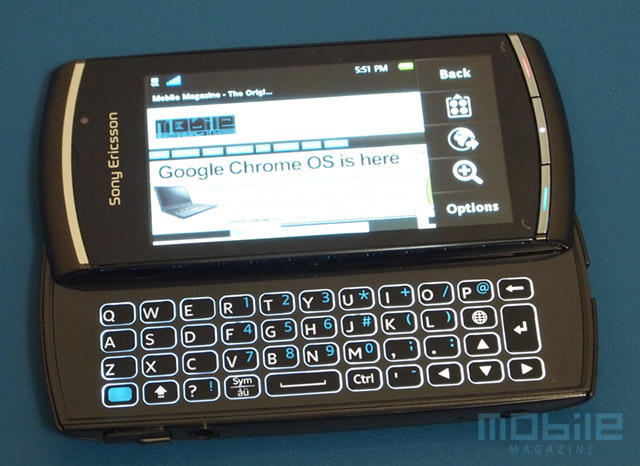 I think it was a good move including the slide-out keyboard on this device, because I’d imagine typing on the resistive touchscreen to be quite a pain. The keys have a nice “squishy” or “rubbery” feel to them and there is a suitable “bump” to each key so that they don’t sit too flush with the phone. That’s a good thing. Key travel was pretty good too.

It might take you a little while to get used to the key layout, since it’s a on perfect grid rather than the staggered rows you find on a “real” keyboard, but it gets the job done for mobile e-mails, text messages, and whatever else you want to type on this phone.

The Sony Ericsson Vivaz Pro currently sells for $75 on a two-year contract with Fido or $50 on a three-year contract with Rogers Wireless. Under both instances, you’re not bound to a true data plan. It’s not technically classified as a smartphone, so you can get away with the $10 unlimited browsing option on either carrier. If you opt for Rogers, they’ll toss in a free Bluetooth headset too.

If you really are hesitant about tackling a real smartphone with a real data plan, I suppose the Vivaz Pro can mostly get the job done. You can use the somewhat broken web browser to do what you need to do, but after you’ve used a smartphone, you can’t possibly go back to “half” a device like this. It’s like it’s trying to do the smartphone thing, but consistently coming up short.

When I think about the Vivaz Pro strictly as a “feature” phone, it’s adequate but nothing special. I’d give it a 6/10 or 7/10 with that mindset. If I were to consider the Vivaz Pro as a smartphone, though, it’d barely be passable for a 4/10 or 5/10. It just becomes an exercise in frustration. The only reason why I would want it is for the $10 mobile browsing option. I guess it’s better than something like the LG Neon, but not by much.